Yes, I realize the MLB Opening Day is still 16 days away, but tonight I was fortunate to find some Topps Opening Day on the eve of its official release. However, when I saw the blasters on my local Target's shelves, I almost decide to pass on picking one up. I always enjoy OD, primarily for he inserts but almost as much for the price point. Here's a look at what was staring back at me from the card aisle: 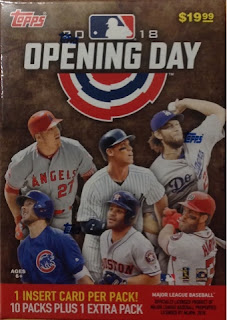 Notice anything that seems off? Opening Day has always been $9.99 for a blaster of 10 packs. I was ready to spend that much for my cardboard fix, but as much as I like the product there isn't anywhere near $20 entertainment value for me in it. I'm not sure what made me carry a box to one of those price scanners, but I did. Fortunately, the bar code scanner at $9.99 like always. So, that learned, I snagged a box and was on my way. 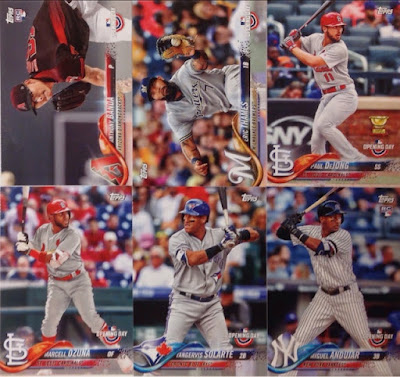 First up, a look at some of the interesting base cards. The Banda and Thames were some of the most unique photos in the bunch. It's not surprising. I always tend to enjoy the horizontals. I included DeJong simply because of the Rookie Cup. Ozuna and Solarte are Topps Photoshop specials - AKA touched up photos of them in their new unis. I had to include the Andujar since I pulled it. Sorry all of you non-Yankee fans out there. 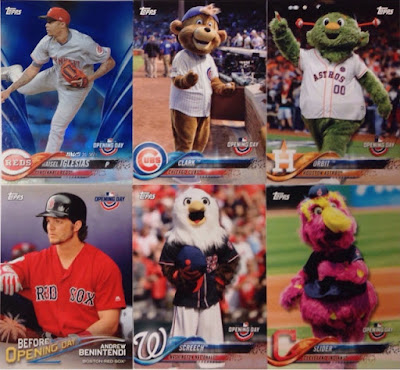 The OD blue parallels really pop this year! I'm looking forward to tracking down some of the Yankees of this variety. As always(and stated on the box) OD is packed with inserts. I'm not sure I'm a fan of the Before Opening Day set that is making its debut this season, but I do love those mascots! I hear they not only have mascot autos, but auto/relics as well this year. 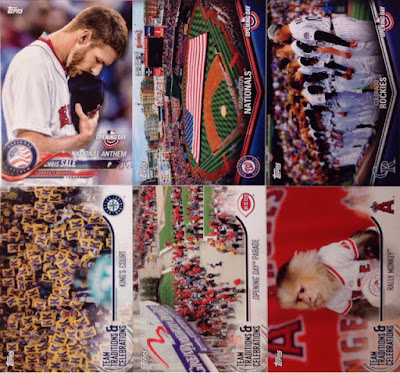 It hurts me to see Chris Sale in a BoSox uniform, but that National Anthem insert is really nice...and a tough pull at 1:286 packs! The Opening Day insert keeps with the anthemic vibes, highlighting more pre-game festivities. Perhaps the insert I was most looking forward to, Team Traditions & Celebrations was the set I was most disappointed in(so far). This one boasts a 'rookie card' of The Freeze from Atlanta, Yankees Old Timer's Day, Sweet Caroline in Boston, and Take Me Out to the Ballgame in Chicago. As you can see, I'm stuck with a bunch of paper K's, a parade I didn't know existed, and the dang Rally Monkey. I was shut out of those inserts I was really anticipating in addition to an obtainable Ohtani RC and a photoshopped Stanton in a Yankees jersey. Oh well, I guess that just gives me an excuse to pick up some more of this to continue that hunt. Thanks for reading.
Posted by Tim B. at 11:12 PM

Some of My Favorite Blogs