Some Tim Horton's with My Morning Coffee

Yesterday I received a cage that contained some goodies from Tim Hortons. 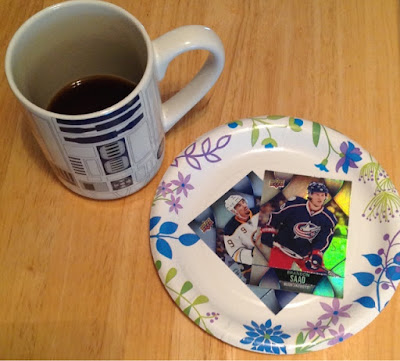 Those donuts look and taste like cardboard... Wait! Those aren't donuts, they're my first two additions from this year's Upper Deck Tim Hortons Hockey set. 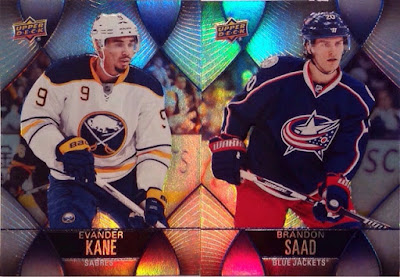 Here's a closer look. It's hard to see, but the top of the Saad has some foil loss. No, that's not from where I tried to take a bite, it was from the tape that was used on the penny sleeve it was shipped in. At first, it frustrated me that the card was damaged due to incorrect packaging, but in the end it's not terribly noticeable and I'm really glad to have a few cards from this set. I'm thrilled that UD has continued its partnership with Tim Hortons and brought the set back for a second year. Similar to the inaugural set, this year's cards are not short on shiny foil. I, for one, love he design! 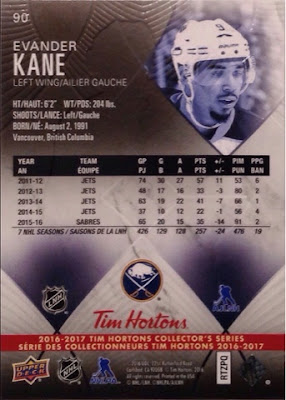 Here's a look at the backs. The only thing I would have liked better here is if they were able to include full career stats. After getting this first taste of the set, I'm hoping to pick up a few more in the coming weeks or months. Thanks for reading.
Posted by Tim B. at 10:16 AM 2 comments:

Now Starting at QB for the Denver Broncos...

My Broncos seem to be playing it safe with Trevor Siemian's shoulder injury. So, after stepping in just before half time last week and playing a solid second half, Kubiak is starting the rookie Lynch this week against the Falcons. I've been slowly acquiring Lynch RCs since the draft and figured this would be a perfect time to show off two that haven't been featured here yet. 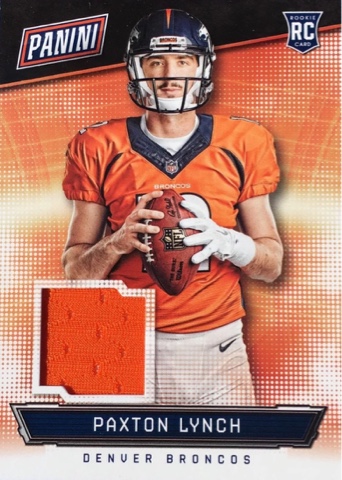 I grabbed this Panini National Convention exclusive RC relic off of eBay shortly after the end of the National. Even though it's a plain orange swatch, not a sick patch, this is one that I'm thrilled to add to the PC. The other acquisition comes courtesy of a first time cardsphere trading partner. 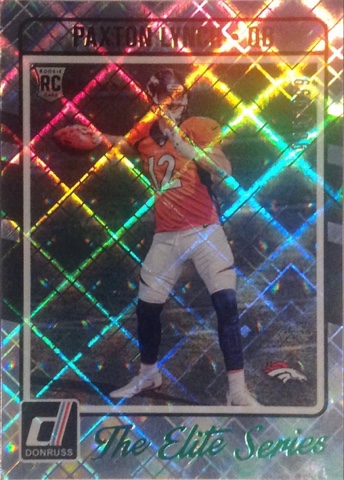 Sports Card Collectors posted this as one of the inserts pulled from the box of Donruss a Football that was reviewed. I immediately tried to work a deal for this. I offered up a Rueben Randle relic card and before I knew it, this card was in hand. thanks for the deal SCC! I love the design(and shine) of this one. The scan doesn't even begin to do it justice. Hopefully his performance today is as brilliant as this card. Go Broncos! Thanks for reading.
Posted by Tim B. at 11:55 AM No comments:

As many of you are already aware, Topps decided to issue the entire flagship checklist in a special Chrome factory set that was only available online. The announced print run for Chrome Sapphire was 250, non-serial numbered sets which also contained parallels limited to 5 copies and superfractor 1/1. The retail price for sets was over a grand so I knew there was no way I was going to get my hands on one of those, so I began looking for select singles to pick up. I found an eBay seller that offered flat rate shipping regardless of the number of auctions won. I placed bids on several Yankees, Rays, and a few other random singles. At the end of the day, I only won three auctions. Let's start with one of the main cards I wanted to add to the collection. 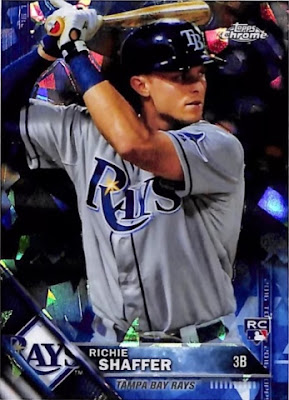 Over the past two seasons, I have really enjoyed watching Richie Shaffer play in Durham and he provided one of my favorite moments of last season when he hit his first MLB home run. I've posted about that before so I won't go through the specifics again, but for those who are curious, you can see part of the aftermath on his 2016 Stadium Club RC. I kept with the 'favorite Durham Bulls' theme for my next pickup. 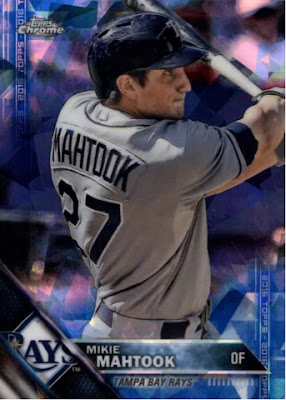 Mahtook has spent a good bit of time with Tampa over the past two seasons. I'm hoping that he can put it all together and have a breakout 2017 season. I was shutout on the Yankees I bid on, but the last win brings me a great addition to my post-season highlights collection. 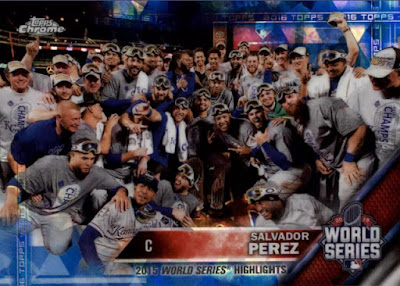 I'm not a Royals fan by any stretch, but this is a really cool team picture taken in the midst of their championship celebration. Maybe at some point in the near future I'll have a chance to chase a card like this for the Yankees or the Rays. Anyways, off the topic of the Sapphire Chrome and back to the 'former Durham Bulls' topic. 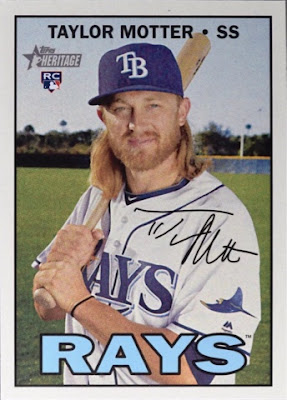 Taylor is probably my favorite Bulls player over the past two years. I was thrilled that he got the call to the bigs this season. I am actively searching out copies of this card and any or all parallels from Heritage High Numbers. I believe the existing parallels are 'reverse stock', red back, and gum stained. If anyone out there finds any and you're looking to relocate them to a new home, I'm your guy. Thanks for reading.
Posted by Tim B. at 4:53 PM 2 comments: