The past week and a half has been exceptionally difficult at work. It has been both physically and emotionally exhausting. I was looking for a boost so I hit up the local Target on Monday, hoping that there was a chance I'd find some Heritage on the shelf a few days early. Unfortunately, it wasn't to be. After another long day yesterday, I decided to try one more time before release day. When I got to the card aisle, I didn't see anything at first glance. As I began to stare at what was there to make a decision on something to settle for, I saw it...a few hanger boxes! I grabbed two of the four that were there and hit the road. 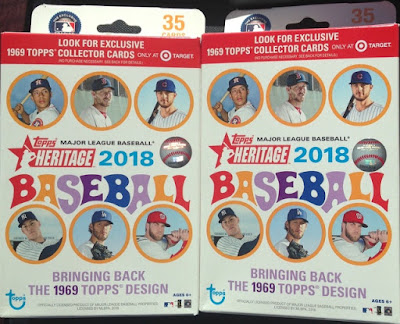 I'm digging the package design on these! Let's check some of my favorites.

I like the cool checklists with player pics and the retro rookie cups are pretty awesome. I chose the Montgomery not only because he is a Yankee, but I think it's great that you can see a bit of the facade of George M. Steinbrenner stadium in Tampa.

Here are a few rookies and a high number SP. I am thinking of beginning a PC of Jose Pirela. I liked him when he was in the Yankees system and was lucky enough to meet him and get an IP auto at the Triple A All-Star festivities in Durham a few years back.

These are probably my favorites of the bunch so far. I'm not an Astros fan, but I love playoff/World Series highlights and these are done really well. 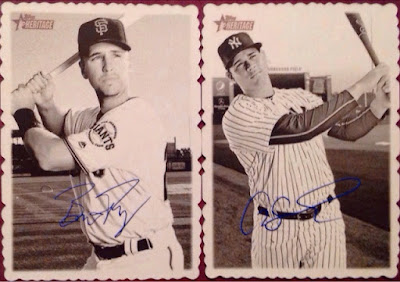 Lastly, I found one of these Deckle edge insert in each hanger. As you may already know, I am a sucker for these and am still trying to complete the original 1969 issue. Inserts like these have twice popped up in Archives over the past 5 years and I am slowly working on putting those sets together(needs will be posted on my set page shortly). These are even better in my opinion, though for reasons that some may really dislike them. They are not faithful to the original set in two significant ways. First, they are full size and not 'mini'. Second, they are done on vintage, thick stock. I'm probably in the minority, but I'm not going to get hung up on those differences. I like these and will definitely be working on putting together the full 30 card set.

Sadly, I didn't pull any of the All-Star subset. I'm looking forward to seeing those. Since it's officially release day, I think I'll go out and try to find a few loose or fat packs that I can use my coupon(from my series one blaster). Good luck to anyone out there searching for some to rip, I hope you find product on the shelves and pull some great cardboard! Thanks for reading my brief thoughts.
Posted by Tim B. at 10:41 AM 3 comments:

My quest to catch up on some (not so)recent trade packages and establish a semi-regular posting schedule begins anew today. Hopefully this time I'll be able to make it last. Though this is not chronologically the first package I need to catch up on, it did contain a huge PC addition and the scans were ready to go so this is where I start.

Several months back I was tweeting back and forth with Matt from Sport Card Collectors. He informed me that he had recently pulled a card of a guy I collected. From the moment the picture came through the message, I knew I needed to find a way to make a deal. Fortunately enough, Matt was super laid back about the deal and I was able to come up with a mixed bag of cards that hit some of his collecting interests. In fact, he sent me the centerpiece of our trade before I finished putting together his return package. 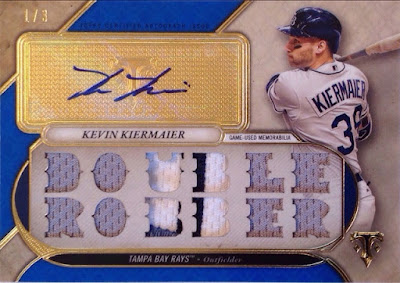 This awesome patch/auto of 'The Outlaw' was that centerpiece. This blue parallel #'d 1/3 came from his box review of Topps Triple Threads, so as is customary - thank you Topps for providing that box to him for his review! Additionally, I received two other Durham Bulls guys to round out my end of this huge deal. 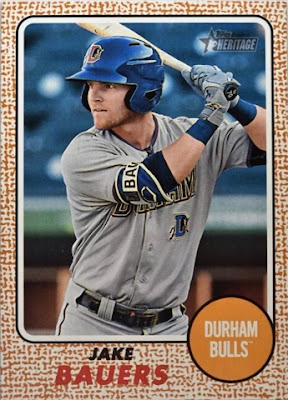 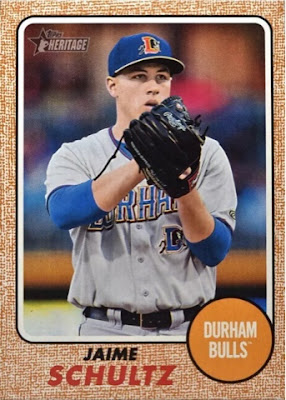 I hadn't opened any Heritage Minors and was thrilled to receive these two in the package. Bauers had a really good first season in Durham last year and Schultz has been a fan favorite for the better part of the past 2 seasons. He led the league in K's the year before last. As much as I'd like to see him in Durham, I hope he sticks in Tampa this year. A short while after these arrived and I sent the return portion of this trade, I received a somewhat unexpected PWE from Matt as well. 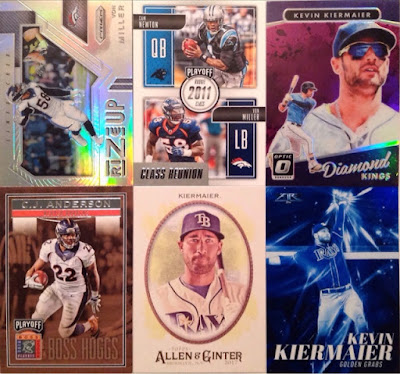 Pure awesomeness all throughout! Three new Kiermaiers highlighted the envelope, but all were needs and very much appreciated. Hats my second different version of that Golden Grabs insert from Fire and I am slowly but surely(though inadvertently) building the rainbow on the Optic Diamond Kings(and the Optic base - more on that in another post). This one happens to be an unnumbered purple prizm parallel. Thanks for a really great swap, Matt! I've already started another stack to be sent your way in the near future. Thanks for reading.
Posted by Tim B. at 5:59 PM 1 comment:

Christmas may be far behind us, but I can still get into the Holiday spirit thanks to the awesome Bob Walk the Plank Secret Santa package I received courtesy of P-Town Tom. The surprises with this package started from the moment it arrived. 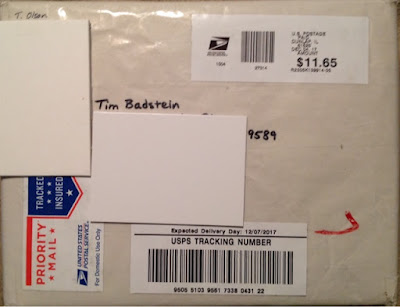 While I knew I should be expecting a package from someone in the Secret Santa exchange, I wasn't expecting to find this hulking package on my doorstep(too big for the mailbox). I was thrilled when I opened it too. 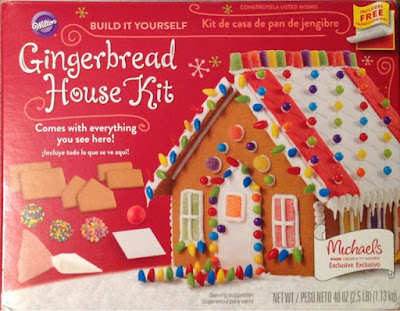 Gingerbread!!! Oh yeah! To my slight disappointment, the box didn't actually contain a gingerbread house kit. It did contain a bunch of individually wrapped presents though. 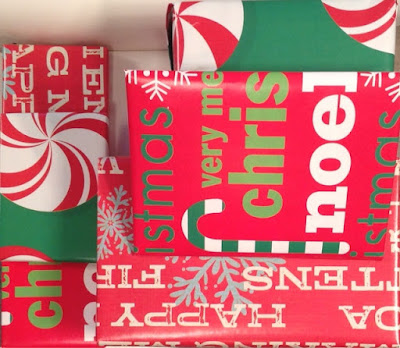 It may be tough to tell from the way I arranged them for the pic, but there were 6 presents within along with a great note(which I didn't scan) that explained how all this cardboard goodness stayed within Matt's $10 limit. I briefly considered turning this into my own little advent calendar, opening one present each night, but that thought went away almost as quickly as it arrived. There was a little bit of everything in here. 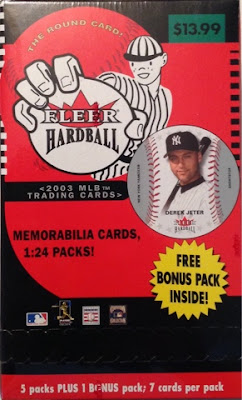 First up, a blaster of a set that is about as oddball as it comes. Tom apparently won this as a door prize at a show and thought it would be a great add in to my Santa gift. I'm really appreciative that he did. It was really fun to rip into these packs! 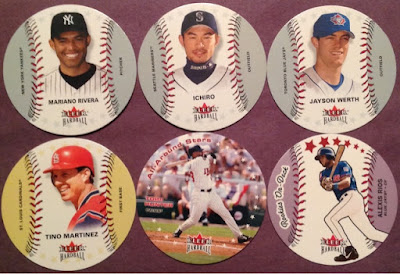 Here are some highlights. I was thrilled to pull the Rivera and Ichiro. Take a look at how young Jayson Werth looks there! The Tino is a parallel. While it's nice to add a new Tino, it kinda hurts to see him in something other than pinstripes. The Torii is an insert and the Rios is from the rookie subset. Sadly, there wasn't a 'hit' in this box but it was definitely fun nonetheless. These kinda remind me of pogs from back in the day. Next up was a random assortments from his collection that didn't fit his PC preferences. 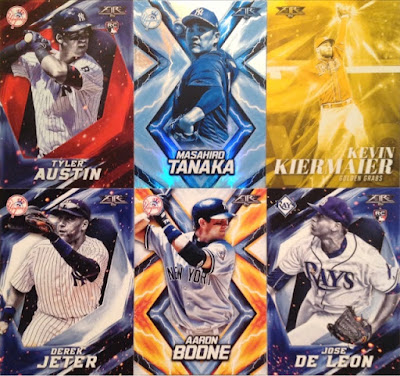 I didn't open much Fire so all of these are new additions for me. It's hard to pick a favorite here. I like the look of the Tanaka and it's always great to add a new DJ. I thought it was especially good timing that the Aaron Boone was in here considering he is the new Yankee skipper for 2018. The Kiermaier may win favorite of this scan though. It's a gold parallel of an insert that showcases his strong suit that has nabbed him a pair of Gold Gloves to date. 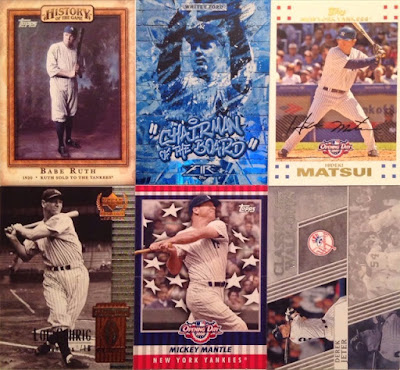 Here are some Yankees World Series heroes, old and newer. I particularly love the Jeter Classic Walk-Offs which highlights the night he became Mr. November. 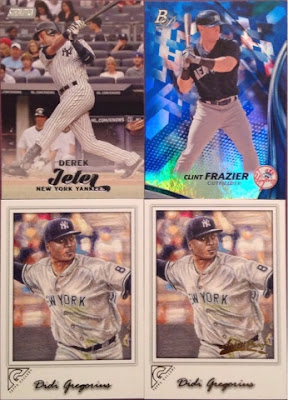 I was lucky to find a few packs and a blaster of Stadium Club before it all disappeared from the shelves of my local Targets and Walmarts. I was not lucky enough to pull a base Jeter from the little I opened. The blue parallel Frazier is pretty awesome too, especially since he hasn't been traded away...yet. The pair of Didi cards represent my first experience with the rebooted a gallery product. I loved the original product and these look nice even if the card stock doesn't mimic the older product. It was pretty cool to see the base and Artist Proof parallel in this package. There was so much more than I scanned here. All in all, these were sent in a 200 count box which was a blast to flip through. As fun as this gift was up to this point, the heavy hitters were still to come! 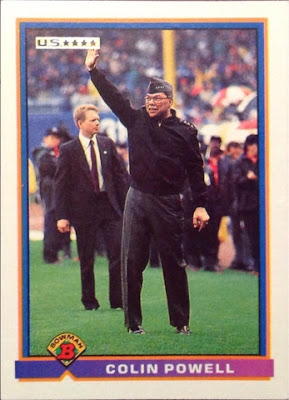 This 1991 has been on my Cardboard Wishlist since shortly after I started this blog and remembered that I had a copy when I was younger. When I picked up my collection after a few years away, I pared it down a bit in preparation for a move to a smaller space. Shortly after I started this blog, I saw this card on Listia and was reminded how much I liked it when I was younger. I immediately went looking for it. After flipping through several monster boxes, I came to the conclusion that it must have been a casualty of my pre-move purge, along with others from the junk wax era. Once I realized I no longer had a copy, it took up residence on my Cardboard Wishlist. I'm happy to be able to cross it off that list. This gift package wouldn't stop there though. 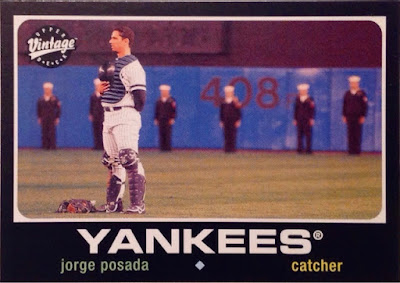 This UD Vintage Posada comes from a time when there were so many sets available that it was really tough to see all of your team's issues and even more difficult to grab a copy of them all. I didn't know this card existed until I saw it on Dimebox Nick's blog when he was able to cross it off his Dimebox Dozen list. I immediately fell in love. The photo selection is incredible and it's a card of a member of the Core Four! Check off another card from my Cardboard Wishlist! Truth be told, I decided to add these last two cards to my first ever COMC order, but I received them in this package before my order arrived. It certainly didn't diminish my excitement at having received these. However, if there's anyone out there that would like a copy of either, I now have dupes to share. In addition to these wants, my Secret Santa package knocked out a ton of set needs. Three of the sets from my list were completed courtesy of Tom's generosity. 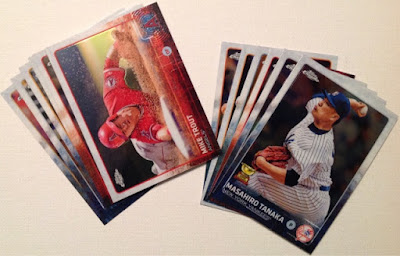 The last dozen needs for my 2015 Chrome set build were included. 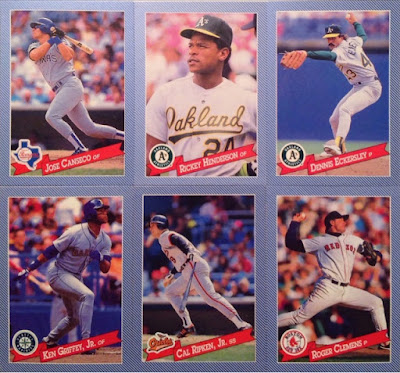 Though I only scanned 6 of them, I received a whopping 14 of these to close out my 1993 Hostess set. Last but not least, I was able to finish off another early '90's oddball set. 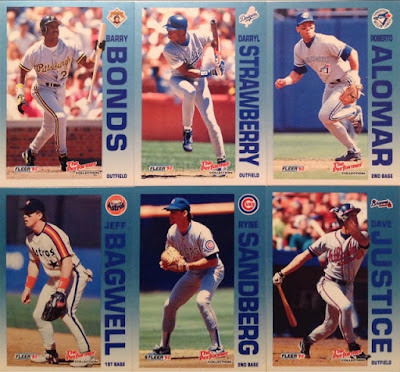 I once again only scanned 6, but I unwrapped the final 8 of these 1992 Fleer 'The Performer Collection' cards that could be found at participating Citgo locations many moons ago.

I'm sorry it has taken me so long to finish writing this and get it posted, but I have to say one last 'thank you' to both Matt for organizing this Secret Santa operation and to P-Town Tom for sending an incredible gift package! Thanks to all for reading.
Posted by Tim B. at 2:42 PM 3 comments: