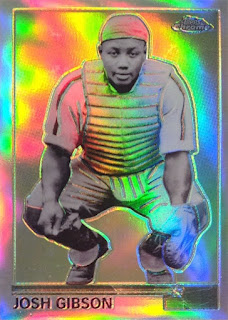 I only wish the scan actually did this card justice. It is extremely satisfying to finally acquire a card I'd searched for so long to find. Quite honestly it's a feeling I'd really like to replicate again in the near future(fingers crossed). Anyway, thanks for reading.
Posted by Tim B. at 4:48 PM 6 comments:

Could it be true? I love oddballs. Especially if they are food issued, baseball cards. In 2016, Topps and Walmart got my hopes up that we were about to see the re-emergence of these into the hobby when they released the Marketside pizza baseball set. Unfortunately, that set was a one-off and the only food-issue that has been released since was an MLS focused Post cereal release last year(yes I collected that). However, it looks like we will be getting another food-issued baseball set in 2019!

At the Topps Industry Conference which took place February 24-26, a set which will be released in Utz snack products was announced. I borrowed the following pic from @SportsCardNews on Twitter. 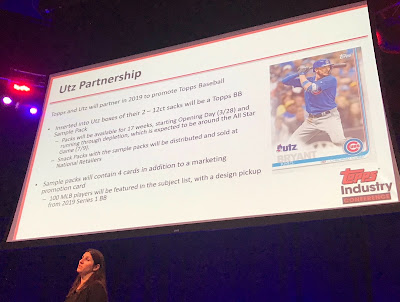 All of the details I can find so far are summarized in the slide in the picture. What do you honk about this news? Will you be trying to search these out? I know I sure will be. Thanks for reading!
Posted by Tim B. at 10:26 PM 7 comments:

Embarking on a New Collecting Journey

Hello to anyone who might still be out there! It sure has been a long time since I've posted here. I'm not really sure how it got to be so long. I feel like I blinked and seven+ months of blogging inactivity have passed by. I've written several different 'return post' drafts along the way and subsequently deleted them all. Each seemed like a good way to re-engage, but inevitably something would come up and I'd have to leave the post unfinished. By he time I was ready to begin work on it again, he subject material just didn't seem that exciting anymore. That is probably a function of my inactivity being strictly blog related, not hobby related. In fact, the past several months have seen quite a large explosion within my collection. In some ways this is good, but in many ways things are admittedly getting a bit out of control. For a little while, I thought I had done a good job setting and maintaining limits on my various collecting interests. However, the flood gates started to open about eight months ago and I am just now starting to close them a bit once again.

I'd like to say that I have no idea how hints spiraled so quickly, but in truth I know exactly how. I was working on a trade and happened to start digging through a box that hadn't seen the light of day in a few years. Immediately I was reminded of players, insert sets, and parallels I hadn't thought about in just as long. It's this idea that brings me to the focus of my first post in what feels like forever.

World Series/Playoff highlight cards have long been a fixture in baseball card sets, but they were significantly more difficult to come by in football products over the years. Imagine my surprise when 1998 Skybox Premium football dropped and there was a 15 card Super Bowl subset called One For the Ages that happened to feature my beloved Denver Broncos' victory over the Green Bay Packers in SBXXXII. I was thrilled when I was able to complete the 15 card base set via pack ripping. On the day I finished the set, I was busting a few packs at my then LCS. A handful of packs into my day I pulled the following Star Rubies parallel: 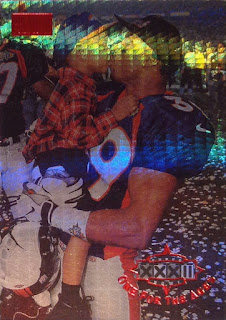 I was happy with the pull, but younger me was disappointed that it wasn't one that had Elway or Terrell Davis on it and I was still laser focused on trying to pull the last base card I needed for the subset. A few packs later I finished my subset and stopped buying packs for the day. Before I left the shop, I slid the somewhat disappointing parallel into a sleeve and top loader. When I got home it went into a box of some 'lesser' PC cards where it stayed, rarely touched in the years since. It had probably been around 5 or 6 years since I had last seen it when I stumbled upon the box it lived in while searching for cards I could include in a (relatively)recent trade. Funny thing is that when I saw it this time around it stirred up all of my memories surrounding that first SB victory for the Broncos. There began a search for other Rubies from the subset. I wasn't committed to trying to build the parallel subset, but the thought was now floating around my mind. In short order I had added a few more for cheaper than I thought I could get limited parallels from 20 years ago. 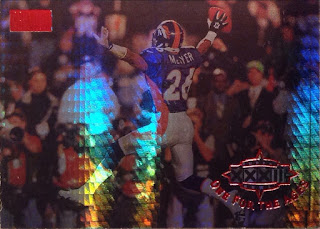 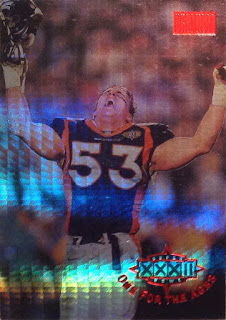 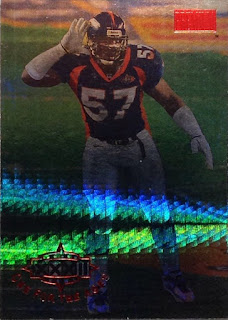 These three were acquired within a few weeks of starting to search. Slowly, I began to consider hunting for the full set. However, none of these featured TD or Elway and those would surely be cost prohibitive. I set a saved search notification and put the idea of finishing this potential project on the back burner. Then one day about a month later, a notification for another one of these popped up. It was reasonable priced with a 'best offer' option so I sent in an offer that I was comfortable with and it was quickly accepted. A few days later this greeted me at the mail box: 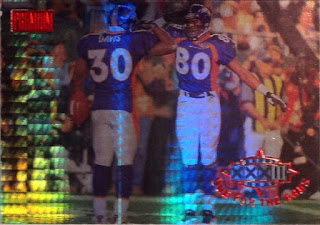 I was so excited! TD, Rod Smith, Mile High Salute...its all here in its sparkly glory. It was here I decided that finding the rest of these would be an official collecting goal. I just told myself that a task like this would require time and plenty of patience(funding and collecting sacrifice too). What immediately followed my decision to try to complete the subset was several weeks of no luck finding additional needs. Why not test hat patience right out of the chute, right? About two months into the hunting drought I received a new notification. I was immediately struck with joy and sadness all at the same time. There was joy at the potential of adding another of these to the collection. There was sadness because the asking price was nowhere near being in my collecting budget. I immediately began searching my collection for cards I could sell to raise funds. I sacrificed my Bray Wyatt 1/1 auto that I pulled a while back. I set it up on eBay with a really high BIN/make an offer. I was surprised that within a day I had an offer that was higher than I anticipated settling for. I gambled to see if I could get more out of it and countered. The buyer upped the original offer a bit and I accepted, all the while hoping that the sale would help me land the latest project need to hit the market. Once the funds hit my PayPal account, I offered on the Star Ruby. After a bit if back and forth, a sale price was agreed upon and I was one card closer to my collecting goal. 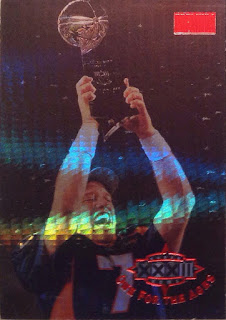 Fast forward to just before Christmas, and I hadn't seen any other copies online or at the few shows I was able to browse. All of a sudden, a 6-day auction popped up for one I needed. Every day I anxiously checked in on the auction to see if any new bids were made. While I certainly preferred the gratification of the BIN nature of the others I had added, the waiting forced by the auction reminded me that the hunt should be just as fun as reaching the goal. I can't easily verbalize how I felt, but going through a week of checking and hoping and checking again made winning that auction even more satisfying. 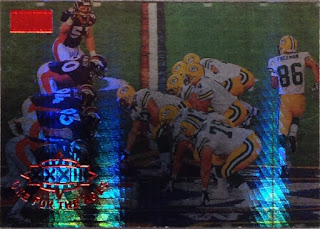 With this one in hand, I sit at 7/15, teetering on the edge of halfway complete. Once again it's been a long time since a new need has popped up. That's alright though. Patience is on my side. Someday I'll track down the eight remaining needs and this project that inadvertently started over 20 years ago will be compete. Until then, I'll do my best to enjoy search. If you've made it this far, thanks for coming along on the journey with me.
Posted by Tim B. at 1:43 PM 4 comments: