The Most Wonderful Time of the Collecting Year

Alright, alright... I'm probably exaggerating quite a bit, but the 'Holiday Mega Box' part of the collecting season is upon us! 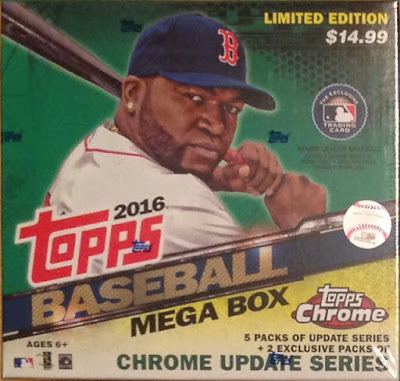 While perusing the card aisle at my local Target the other night, I happened to see this thing of beauty staring back at me(because of the contents, not because Big Papi is on the box). I wasn't even aware that the release date was near. I happily grabbed a box and brought it home. I really liked the bubble-like, sparkly design Topps put out last year and when I heard these would be done in the same way, I was thrilled! Though I'm still working on the last few I need from last year's set, it was one of my favorites of 2015. This year's offering is a 50 card set that thankfully eliminates the skip-numbering of the 2015 set. Let's get cracking! 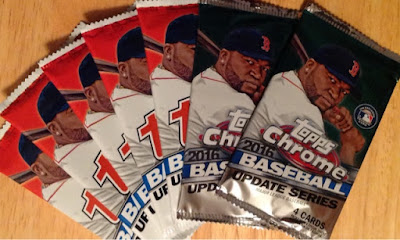 Since I haven't been posting quickly, I actually had time to visit another Target and pick up a second box, so I'll show off all 16 cards I've pulled thus far. I decided against scanning any of the base Update since its been out for a bit. I've also already collated the cards into set-building order so there won't be any creative box vs. box comparisons or anything. Sorry about that... 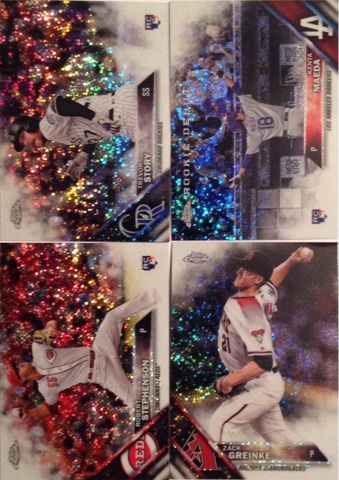 Man, I really dig the way these look! 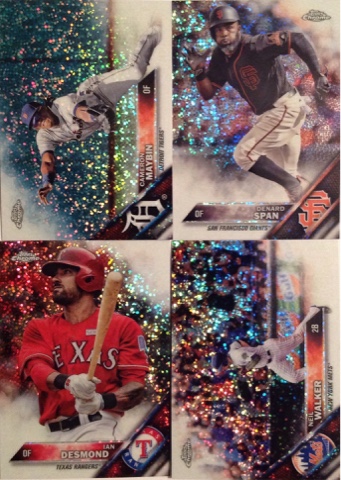 This scan was not nearly as interesting as the first one. 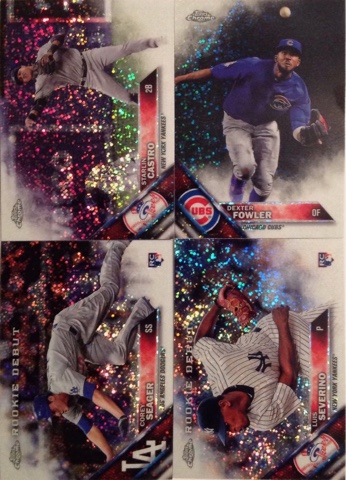 This was, by far, the best of the base dominated scans out of these two boxes. Two Yankees, a great Rookie Debut, and a World Series Champion are hard to beat. 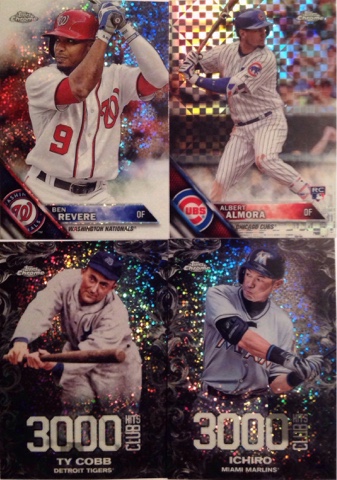 Here is the final base card and the parallel and inserts. The Almora RC that's done in the x-fractor style is /99. I wasn't a huge fan of the 3000 Hits Club base cards, but these look better and the fact that I pulled Ichiro and Cobb to start may sway me to try to assemble the complete insert set. Getting back to the Almora, I'm torn. I like the x-fractor look, but it just doesn't fit the set. Last year the parallels were gold and black, numbered /99 and /50 respectively. Both were still bubble refractors and the color scheme kinda made sense. However, this year the x-fractor is /99 and the parallel that is /50 is the gold refractor(there are also regular refractors). None of the parallels sport the bubble look this year...I'm so bummed.
I've got a long way to go on this set, but I'm definitely going to piece it together. I'm sure that in the coming days and/or weeks that I'll be picking up at least a few more 'mega boxes'. Thanks for reading.
Posted by Tim B. at 6:49 PM 3 comments:

That Time the Durham Bulls Won the World Series

Wow! Here we are more than 48 hours after the final out of game seven and I'm still in awe of how great that game(and the Series) was. It was truly a team effort that ended the 108 year drought. However, once the rain had subsided and the tarp was taken off the field, the difference makers were a few guys that spent some minor league time in good ol' Durham, NC. 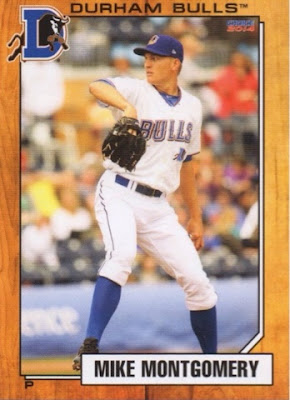 Mike Montgomery was a fave of mine during his time in the Bulls' uni. He was one of the few Cubs relievers that actually saw the mound in the Series and he was serviceable during his appearances through game 6. I'll always remember him for his part in a combined no-hitter in Durham a few seasons back, but I'm sure he'll be remembered by everyone else for the two pitches in November 2016 that earned him his first career save and earned the Cubs their long awaited third World Series championship. 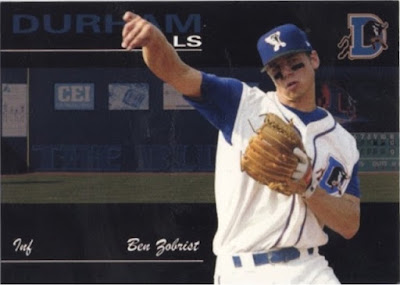 There he is, Mr. World Series MVP, Ben Zobrist. Unfortunately, I wasn't going to the ballpark during the time he spent playing in the Bull City. I do have this card from the 2007 Bulls team set to remember it by though.

As I previously mentioned, I was pulling for the Cubs to win the championship and I was beyond thrilled that a few guys with some local ties helped them do just that. Congrats to all of the lifelong Cubs fans in our community, I hope you enjoy this victory and this new montage set to Eddie Vedder's 'All the Way'.

There has been high drama in the World Series this year. We sit in anticipation of tonight's winner take all game seven and I couldn't be happier! Mostly because I've been all in pulling for the Cubs and they've been able to stave off elimination for two straight games, but also because there is nothing more entertaining than the anything can happen feel of a single game to determine the WS champion. Of course, it's easy for me to say that when the Yankees are not involved and my emotional investment  isn't at its peak. Sorry to all the Cubs and Tribe fans out there, I hope you all make it through the game without too much suffering.

Anyway, a few weeks back I decided to take a chance on a razz in a Facebook breakers group. The prize was a box of 2016 Topps Triple Threads. I was surprised to actually win! The breaker let me choose a box on FB live and I watched as he cracked my prize. There was no HUGE hits, but I was playing with house money, so I was thrilled to just get some of these in hand for the first time. It seems particularly appropriate to share one particular card from said box. 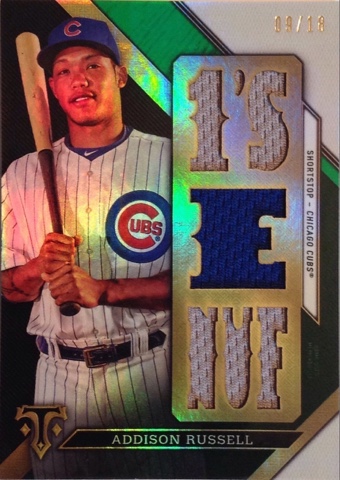 Game six hero, Addison Russell! The scan really doesn't do this card justice. Besides the fact that Russell delivered 6 RBIs last night, there is another reason I feel this is a great card to share today. Just check out the message made by the relics. One's enough. This has obviously been the team's outlook for the past two games and it has resulted in their season continuing. On the final day of the 2016 season, one more game is enough to bring a third World Series championship to Chicago. Go Cubbies!