I must admit, I've gotten a bit spoiled with finding new releases either a few days early or at least on release day. It's been a busy few weeks between my daughter's spring break and an unexpected increase in responsibilities at the office so I haven't written in a while. However, I have still been active in the hobby(which you'll likely be able to read about in the coming days/weeks). I was eagerly anticipating the release of Bowman this week. After a few exceptionally long days at the office on Monday and Tuesday, I stopped at the local Target on the way home Tuesday evening. The shelves were unexpectedly bare. Dejected, I went home empty handed. The rest of the week was quite a whirlwind. Fast forward to Friday afternoon. After meeting the school bus to pick up my oldest after school, my three girls and I loaded into the car and headed to one of our local Walmart to do some grocery shopping(don't judge, it's the closest option to our house for groceries). I am usually underwhelmed by the card selection at this store, so I didn't go in with high hopes. As usual, I did have to have a look at the card aisle when we arrived. Much to my surprise, I found some cardboard worth taking home. 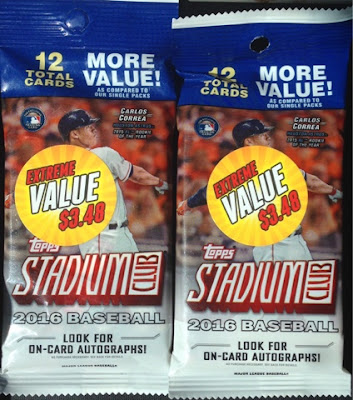 I know, I know. This is not Bowman. Since I'm still trying to piece this set together, I couldn't pass up a few discounted value packs though. I'll write more about these at a later date. A few pegs over from these 'clearance' packs, I found 'value packs' of Bowman. I snagged one, especially happy that the 'bonus' pack of retail-only, yellow parallels contained 5 cards instead of the 3 that I would have gotten if I had found the pack at Target.

There it is in all its glory. Once I got home, got the car unpacked, and started cooking dinner, I quickly ripped into the pack. 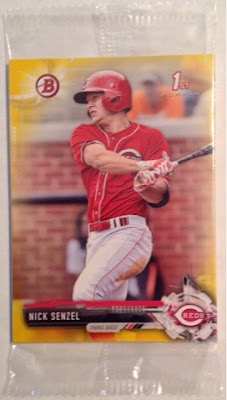 Well, that looks like a good start! Senzel is one of the bigger names in the product and seeing his yellow parallel gracing the front of the 'bonus' pack set the tone for this value pack. 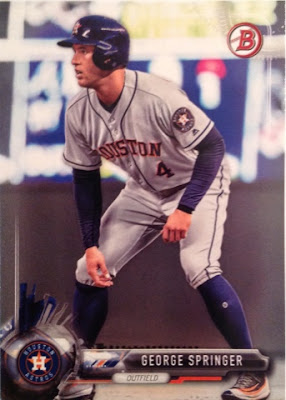 There is the first card of my first Bowman pack of 2017. Don't worry, I didn't scan each card, I was just trying to stretch the enjoyment of my first pack ripping experience over the past few weeks. Overall, I like the design of this year's set pretty well. It's (mostly) clean with the exception of this extraneous pseudo-explosion design surrounding the team logo and a faint, white 'right angle' design behind the Bowman logo. Neither of these unnecessary design elements bothers me enough to take away from my enjoyment of the set. The first pack was solid, with a few decent vets(Harper and Posey) but no prospects I recognized in either paper or chrome form.

Seemingly random side note - I am not big on the idea of recording my pack breaks. This is mostly due to the fact that I absolutely cannot stand listening to my own voice on a recording. However, after I ripped into the final two packs here, I wished I had recorded this break simply for believability purposes. Okay, back to where I left off...

After cracking the three packs, I decided not to specify highlights of each pack, but rather highlights of each subset included. Here are three of the paper prospects that I've heard/read about. I didn't scan any vets/rookies, though I did OK there as well. I was lucky enough to pull Trout, and rookies of Glasnow, Renfroe, and Alfaro. 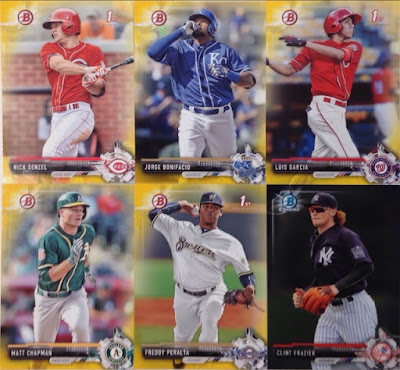 Up next, the contents of the yellow parallel pack. Senzel was definitely the best of the bunch, but I figured he would be. It was great to pull a Chrome version of Clint Frazier. It's my first card showing him as a Yankee prospect and with any luck, it will end up with an IP auto a bit later this season when the Railriders come to Durham. Here's where the unbelievability comes into play. 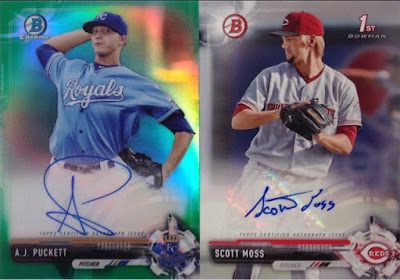 Smack in the middle of the second pack was that green Chrome auto which is #/99 and only found in retail product. So right there, I figured the value pack way exceeded expectations. Then, right in the middle of the third pack I flip to that paper auto(also retail exclusive). Of course, I have no idea who either of these guys are, but to pull 2 autos out of a retail value pack was incredible to me. Apparently, good things come to those who wait(even if the wait wasn't by choice).

Not-so-random side note - in my recent absence from writing I have spent a lot of time interacting within several Facebook-based collecting groups. Assuming the break posts that I've seen(GQ and Bowman) are truthful, Walmart retail packs and blasters have been yielding some incredible hits in relation to their Target counterparts. I realize this correlation is about as far as you can get from scientific data, but if you have the itch to bust some retail product, perhaps it's worth exploring for yourself. At the very least, you'll walk away with 2 more parallels than you would otherwise. I can certainly say that I'll be on the lookout for another value pack or two during my next trip to Walmart(sorry Target, I still love you though). Thanks for reading.
Posted by Tim B. at 4:16 PM 3 comments:

Today I'm back with the third day of my baseball card challenge. The topic for the day is 'a card from the first set I tried to complete'. In the early days of my collecting history, my cards were sourced by my brother. He gave me dupes of stuff he had. However, in 1989 I began hearing the buzz about the Fleer Billy Ripken error. That just so happened to coincide with my local convenience store putting boxes of cards on their shelves for the first time. I used a lot of allowance and birthday money on packs of 1989 Fleer in hopes of finding that 'other' Ripken with the curse word on it. I also bought a few packs of Upper Deck that year. While I liked the design and the 'premium' feel of those cards, I often opted for the Fleer packs because they were less expensive. Sadly, I hadn't heard as much about the Ken Griffey Jr RC. If I had, perhaps I would have bought more UD packs. At some point, I actually began sorting all of the Fleer cards I had and started a list of the numbers I needed. One day, my family drove out to a flea market and I somehow convinced my dad to buy me a Fleer factory set thinking it was the guaranteed way to finally get my hands on that Ripken error(I was a kid and didn't know how those things worked). Obviously, I got home and flipped through each card in that set and was disappointed to find a black box over the bat knob when I came to that card. At that point, I gave up my chase with somewhere around only 20 or so cards to go to complete my hand collated set. To this day, I still have that opened factory set sitting on a shelf in my closet. There are some interesting cards in the 1989 Fleer set. Here is one of my favorites: 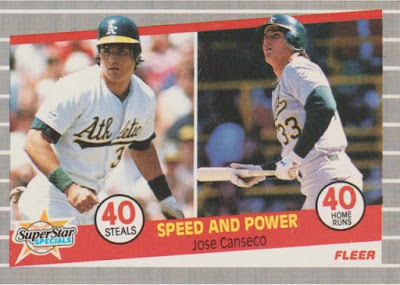 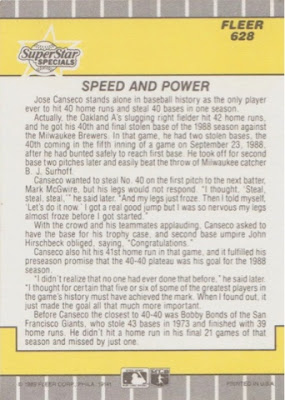 Though I've always been a Yankee fan, I really loved watching the A's in the late '80's and early '90's. During that time, Jose Canseco was probably my favorite MLB player not named Don Mattingly. I love this card because it's a reminder of an incredible achievement by an exciting player prior to his name and legacy being ruined by PED use and whistle blowing. Thanks for reading.
Posted by Tim B. at 11:28 AM 6 comments:

Today is the biggest show of the Year in Sports Entertainment. These days, that statement applies both literally and figuratively. Conservative estimates suggest the show could clock in at between 6.5-7 hours long. WOW! That is excessive. I'll be sporadically checking in on a few live blog sites for the results as I keep up with MLB Opening Day games. Here are a few matches that I'm interested in today, but mostly for the possibility of what may be rumored to happen instead of watching the talent that is actually booked to perform. I won't get into all that here. The point of today's post is to share one of my favorite WrestleMania moments that was captured on cardboard. 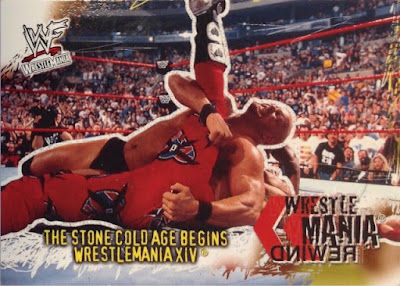 This is the moment one of my favorite wrestlers of all time won his first WWE Championship. The card back does a good job with the recap: 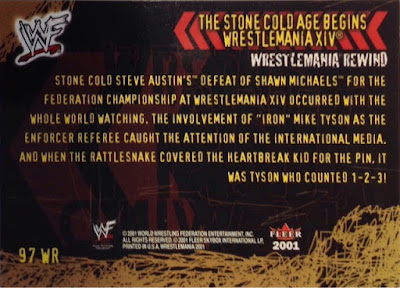 I loved this match for so much more than just the outcome. I thought it had a little bit of everything. There was the Vince/Stone Cold battle, DX, the involvement of Mike Tyson, and a great swerve ending. For me, it was entertaining all the way around. When all was said and done, Tyson's hand hit the mat for a third time and in the words of good ol' JR, 'Austin is the champion'!

Today I tackle the second topic of the 30-Day Baseball Card Challenge. 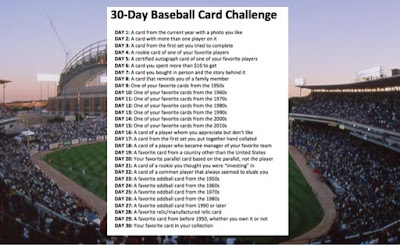 I had to think for a while on this one. There are many types of cards that feature more than one player. After some careful consideration, my mind kept going back to the following: 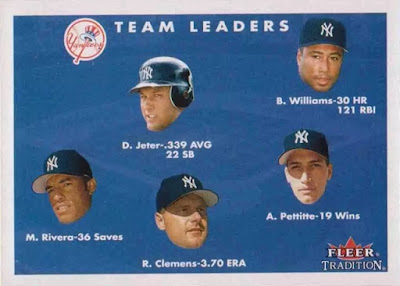 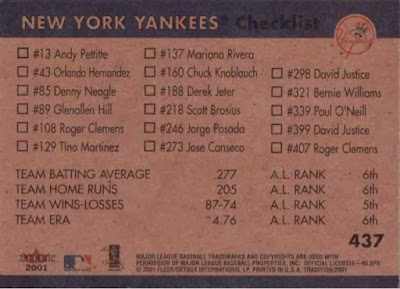 This is the 2001 Fleer Tradition New York Yankees Team Leaders card. There are a few reasons I ultimately chose this card. First, it's the Yankees. Less predictably, 2001 is the first year I really went all in on collecting. Sure, I collected as a kid, but back then, my funds were limited to allowance, Birthday, and Christmas money. In 2001, I had already entered the workforce and was drawing a steady paycheck. Couple that with the fact that I was working about 500 yards from a pretty great LCS and I was picking up cardboard several days a week. That year was also the dawning of the retro themed sets. Fleer Tradition, Topps Heritage and Bowman Heritage all come to mind and I loved them all. I love that this card features the 'floating heads' that were often found in the '60's. Lastly, if you're going to have a modern Yankee card that features multiple players, it doesn't hurt to have 3/4 of the Core Four and Bernie Wiliams for good measure. Thank you for reading.
Posted by Tim B. at 8:01 PM 2 comments: