I haven't seen any mention of these in the cardsphere to this point(though that doesn't mean there hasn't been any). Topps went ahead and released another one of those retail exclusives that mixes packs of a current product with packs of a new chrome parallel of said product. Similar to the Update Chrome set that has been released the last two years, there is now a 'Mega Box' version of 2017 Bowman available at your local Target(or maybe not as the case may be). I became aware of this product early last week and have been on the search ever since. When I hadn't found any by this past weekend, I did a quick eBay search and found that these boxes that are priced at $14.99 for 5 regular Bowman packs and two of the exclusive Bowman Chrome packs were easily going for $30+ per box. This week has been a bit crazy at the office, but I continued my search and it finally paid off last night on the way home. I found 5 boxes and briefly considered buying them all. Once I looked a bit closer at the boxes which were pretty banged up, I settled on the two boxes with the least amount of damage. 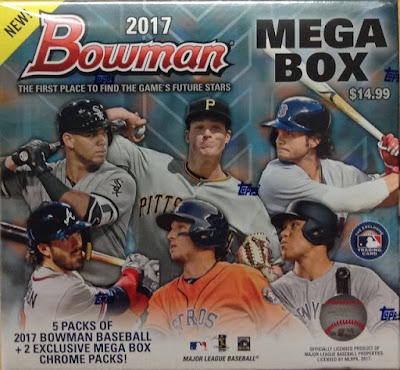 This is what all the hype is about. When I got home and got the kids to sleep, I quickly ripped into both boxes. Since Bowman has been out for a while now, I won't share any scans of those. I will however mention that I have picked up more Bowman than I care to admit to this year. Even after these 10 additional packs, I have yet to pull a base Aaron Judge RC from this product...just crazy. Though the box doesn't state this, each of the Chrome packs contains 5 cards instead of the standard 4. Yay, thanks for small favors Topps! 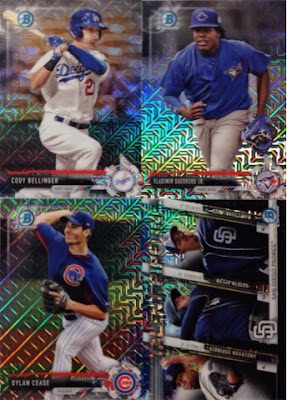 Highlights from box one included the red-hot Dodgers rookie, Cody Bellinger and the next generation Vlad. Though the scan doesn't do them justice, you can hopefully see that the pattern used is the same as was used on the Silver Pack promo cards from flagship series one. I like it pretty well(not as much as the Update Chrome pattern, but still). In fact, I have seen a similar pattern utilized many moons ago and I liked it then too. That can be a topic for a post sometime in the future. Let's get on to pack two, shall we?

Again, not too shabby. I only included 3 in this scan because the insert I pulled from the second box was a dupe of the Padres Talent Pipeline. These were nice and all, but ey weren't all that I unwrapped in the two boxes. Each box had at least one numbered/color parallel.

I was thrilled to see the Rutherford in box one. The Holmes and the Pirates Talent Pipeline were both included in the second box I opened. In case it is hard to see in the scan, all three were purple parallels and were numbered /250.

I really like these! I guess you can say I'm a sucker for the 'special' chrome issues. As much as I'd like to chase the entire set, it is unlikely I'll take that plunge due to the set size. I'm pretty sure that it is 200 cards deep. I will, however, be on the lookout for a few more boxes to break and perhaps a few specific singles(assuming I'm not lucky enough to pull the ones I'm looking for). If anyone is interested I. This product, it should be noted that there are autos inserted in these packs as well. Aside from the auto chase, Topps also slipped the first English language card of Japanese league and WBC star Shohei Otani. If any of you watched the WBC, you'd understand some of the desirability of this card. Don't believe it's a hot commodity? Check the eBay sold listings for this one...they're through the roof. Darn prospectors! I'd want a copy because I enjoyed watching him play in the tournament, but if prices hold where they are or increase at all, I'd be hard pressed not to sell if I happen to pull a copy. Man, I feel bad saying that. Oh well, I guess I'll cross that bridge if I get to it.

For those that didn't know about this, sorry if I've now set you on your own quest to find some. To those who may be like me and have been unsuccessfully searching, I hope you enjoyed the brief glimpse. Thanks for reading.
Posted by Tim B. at 10:46 PM