This is NOT the post I had hoped to be writing today. My plan was to be writing 'More Adventures at the Card Show'. I learned late in the week that there was another show at the NC State Fairgrounds in Raleigh and I immediately started making plans to go(in my head). Yesterday went by without any opportunity, but I knew that my wife was taking one of my daughters out today and I'd be watching my youngest. I planned on getting packed up and in the car to make the hour long drive so that we'd arrive as they were opening the doors. As is often the case when you have kids, those plans just didn't work out. By the time I had things packed and ready to go, it became a question of how much time we would have to walk around before having to turn around and drive the hour back home. Then, I realized it was a toy and baseball card show. I've been to a few of these and they typically consist of about one sports card table for every seven or eight toy tables. I decided the trip wouldn't be worth it this time around.

So, we loaded up to go run some household errands instead. I decided we'd make a stop at one of our local Targets since I really wanted to look through some cards that were new to me. I'm not usually the biggest fan of those repacks you can find at Target and/or Walgreens, but I always look to see what's there and I've broken down and paid the retail cost just because I wanted one of the cards on the front on a few occasions. Today just happened to be one of those times. I was flipping through the repacks which were mostly football and hockey today. Then I came upon this baseball pack. 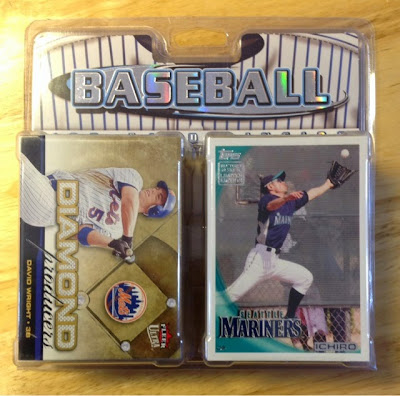 I considered it for a moment and figured I'd probably spend the $4 on this to get the Ichiro and to satisfy my need to look through some cards that weren't already at my house. Once I turned it over, I knew that I would be making this purchase. 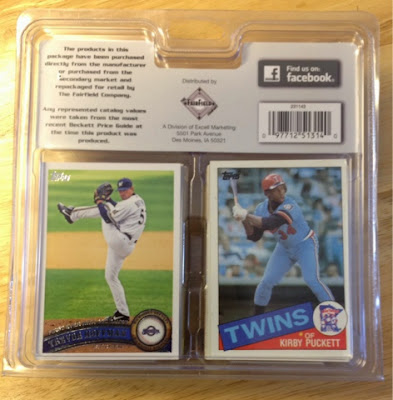 There's a Trevor Hoffman in a Brewers uni, but for those that don't recognize the one on the right, it's a 1985 Topps Kirby Puckett. That would be his RC! At least I knew that if the remaining 96 cards I couldn't see were '88 Donruss and Topps commons, I'd still have the enjoyment of flipping through some cards and the satisfaction of getting a good deal. Here's the highlights from the Puckett RC side. 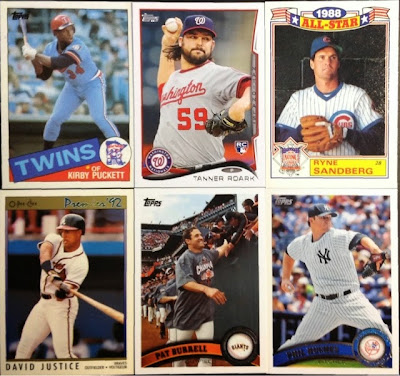 Leading off with the Puckett RC is a good start even with the small white print spot on the front of the card just under the Twins banner. I'm on the brink of beginning a Nationals collection since I'm already compiling Ian Desmond and Anthony Rendon cards, so another copy of this Tanner Roark RC was certainly welcome. Maybe it's a sign that i should expand the Nats collection(or maybe not). I've always been a sucker for those glossy All-Star cards that Topps did back in the '80's. At some point I'm going to put together the Archives version of those released in this year's product. The first pic of side one is rounded out by some OPC, a cool Pat Burrell celebration card, and a Phil Hughes(included because it's a Yankee). 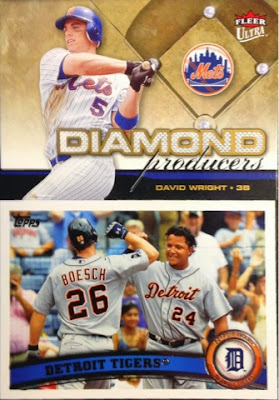 I'm not a fan of David Wright or the Mets, but it is kinda a cool insert and I liked Fleer Ultra more often than not. I really like the Tigers card because Miggy and Brennan Boesch look like they're bringing back the 'ol Bash Brothers celebration from the late '80's. I used to love those A's teams. Ahhh, ignorance was bliss!

We start the last pic of side one with a great Jorge Posada from a Yankees team set. We end with two cards that I had no idea existed. First, I love the Antoine Lavoisier card from Allen & Ginter. The more of the non-sports subjects that I see out of that product, the more I like it. Finally, I'm not as big a fan of O-Pee-Chee as some of you(this is slowly changing), but this 1988 World Series card is really awesome. I am drawn to these 'highlight' type cards anyway and the '88 World Series is the first one I really remember watching when I was a kid. As I mentioned above, I was a fan of the A's teams back then because I liked watching Canseco, McGwire, and Eckersley. I was bummed they didn't win that year, but the performance from Kirk Gibson helped solidify my appreciation of sports heroics/theatrics which started to develop in January 1987 while watching John Elway lead the Broncos on The Drive. 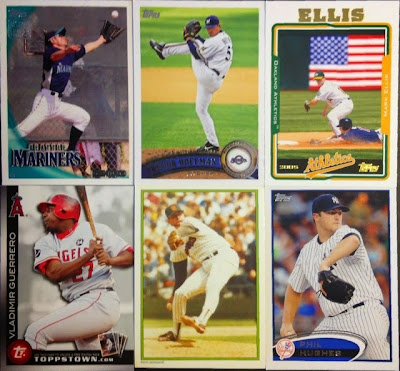 Now we move to the Ichiro side. The Suzuki is a special factory set only card from 2010. The Hoffman is of note because it notes that he was the first to record 600 career saves. I included the Mark Ellis simply because I like the photo. A close play on an afternoon that looks perfect for baseball, topped off by the American flag on the outfield wall in the background. I hadn't seen that design of the Topps Town inserts, and it'll likely be in my collection for a short time only. Unless my fellow blogging buddy Nick from the Dime Boxes blog already has this Vlad, I'll probably send it his way. I'm drawn to the mid-late '80's Topps glossy sets almost as much as those old Glossy All-Stars. So, this Goose Gossage was a welcome sight. Hmmm, another Phil Hughes(again included only because it's a Yankee). 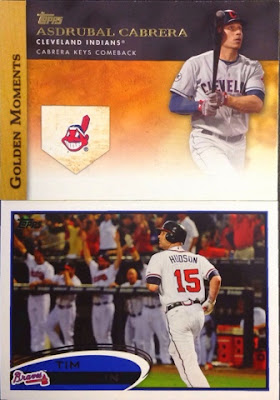 I'm not a Cabrera fan, but just like the other side, it's a nice design for an insert(and one that I didn't already have). This Tim Hudson will probably be on its way over to Nick as well. If he's already got it, maybe I can stretch and include it in with my other celebration cards.

We end side two the same way we ended side one, with three cards I didn't know existed. The Velez is from some sort of non-base 'rookie' set. I've never seen these before and don't know much about what set it comes from, but in all fairness, I haven't tried researching it yet. The Dwight Evans apparently comes from one of those Topps retail store sets that were so abundant in the '80's. I'm pretty sure this one was a Woolworth's exclusive. Wow, I might be from the last generation that knows what Woolworth's was...man I'm getting old! Finally, that Machado is in the 2001 Bowman style. Apparently it was released in 2011. Bowman Chrome Throwbacks? I didn't even know that was a thing.

All told, it was a pretty darn good repack. It certainly was a lot of fun to open, it was a good 'deal', and it allowed me to discover a few cards that I never even knew o look for. It wasn't as good as a day at a card show, but at least on this day it was a reasonable substitute.
Posted by Tim B. at 4:18 PM

Email ThisBlogThis!Share to TwitterShare to FacebookShare to Pinterest
Labels: repack