I Love a Parade!

If you've ever stopped by the blog before, you probably know that I'm always on the lookout for new(to me) Yankees cardboard. Some of my favorite additions over the past several years were courtesy of the Postseason Celebration insert from Topps Update a few years back. I love how they tied my love of the Yankees together with my interest in World Series history, but we will save those for another post at another time. Several months back I was searching for something random and hobby related. I can't remember if I found what I was looking for that day because I got sidetracked by a dark/blurry picture of some cards I never knew existed, but immediately knew I wanted.

All I found was this picture. There was no story, no origin, no information at all. I couldn't make much out from the picture either. What I knew was there was a set of at least three cards(Mariano Rivera, Jorge Posada, and Mark Teixeira) which appeared to have pics from the 2009 Championship Parade, used the 2010 Topps design, and had '27 Championships' where the player's name would normally be. I took this screenshot and ran bunches of Google searches trying to glean some kind of information about these. Where did these come from? Are there more cards in the set?  How can I find copies to add to my collection? Sadly, my search ended in complete and utter failure as I wasn't able to find any answers about the mystery cards. Then, almost as quickly as I became aware of their existence, I forgot about them. It wasn't until I started going through my picture files for new post ideas that I came across that picture again. It renewed my desire to track these down. I knew I'd first have to find those answers so I'd know where to start looking for a trade or purchase. It was back to square one - Google search. This time it paid off. One of my searches led me to a post from someone on the Freedom Cardboard forum. They claimed this was a 3-card set distributed at NY/Metro area Modell's Sporting Goods stores. This forum post had links to clear pictures which clued me in to search eBay for '2010 Topps Yankees Ring Ceremony'. I found a listing for a sealed set and clicked BIN as quickly as I could. The set arrived yesterday. 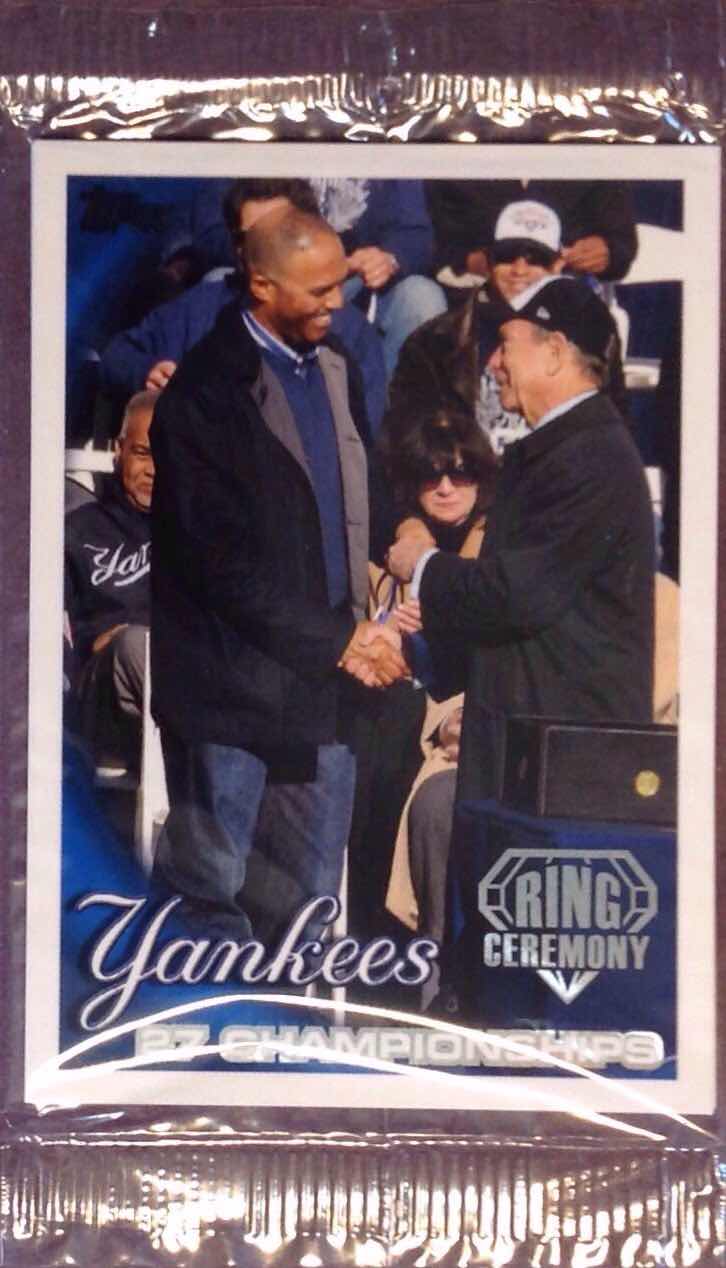 As soon as I finished taking this picture of the sealed set, I quickly freed these awesome cards from their cellophane prison.

I have to say I'm partial to the Mo and Posada. Nothing against Tex, but they're 2 of the Core Four and these cards show moments from the final World Series celebration of their careers. Maybe I'm too sentimental, but I think that's pretty awesome!

The card backs each give a brief synopsis about the regular season, Division/Championship Series, and World Series respectively. They also contain additional images(albeit small and somewhat blurred ones) from the Ticker Tape Parade through the 'Canyon of Heroes'. This set is a really satisfying addition to my Yankees PC. Thanks for reading.
Posted by Tim B. at 8:32 PM