Over the years, my collecting habits have flipped more times than the commemorative coin being tossed at the beginning of the Super Bowl. I've been a set collector on again/off again for as long as I can remember. There have been countless sets that I started/stopped building and then revisited from time to time. There are many others that I started and lost interest in altogether. Ive stuck with a select few for the better part of 19 years now. Today we take a look at one of those: Stitches in Time from 2001 Fleer Tradition. The set consists of 25 base inserts and has both autographed(7) and relic(5) parallels. When the product released, I remember pulling one from a pack and immediately feeling drawn to both the design and the Negro League subjects. It became one of the sets I just had to complete. Within short order, I accumulated 9 of the 25 cards in the set. Just as quickly, my focus moved on to something else. Many times over the years, I have revisited this set, picking one up here and there. As time has passed, the hope of finding these in quarter(or even dollar) boxes at shows has faded.  I currently stand at 14/25 in my possession. The remaining 10 base inserts I need are readily available on eBay or COMC, but not at prices I'm willing to pay.

I had never really considered putting together the relic or auto sets until a little over a year ago while I was running an eBay search for the set. I happened to stumble upon an inexpensive listing for one of the autos from the set and decided to snap it up as quick as I could click the 'Buy It Now' button. Approximately a week later, the auto arrived and as I gazed upon it for the first time I felt a wave of nostalgia wash over me. All of a sudden the wonder and excitement I felt when I saw that first base insert in 2001 came rushing back. Holding that hard-signed piece of baseball history started me on a new collecting journey: track down all of the autos in the set and research each subject that signed for it. 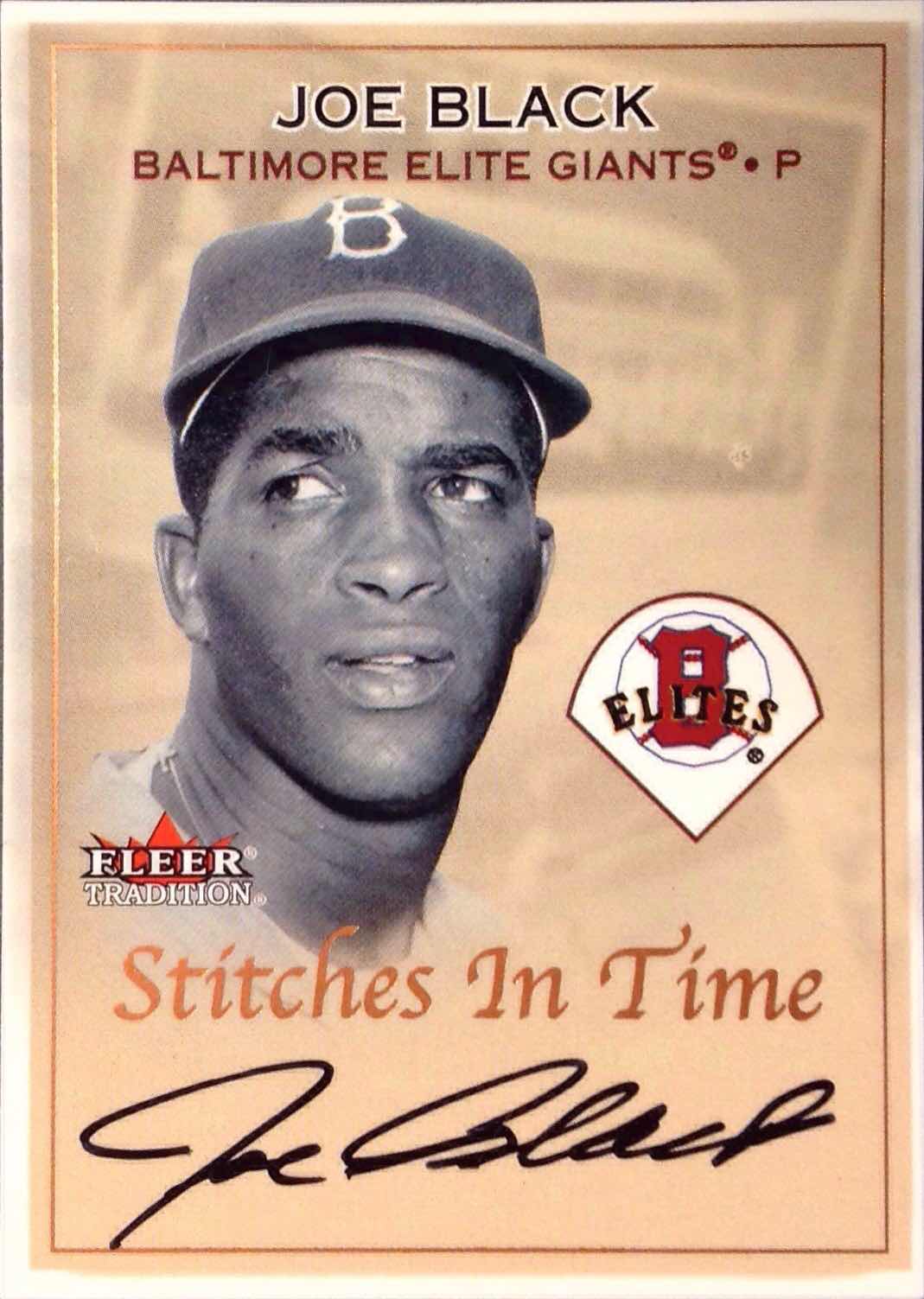 This is the one that started that new journey. He may not be a household name like some of the others in the set, but Joe Black had an incredible MLB rookie season. Having already logged seven seasons in the Negro Leagues and a year in the minors, he made his debut with the Brooklyn Dodgers in 1952(5 years after Jackie Robinson broke the color barrier). Black finished the season with 15 wins, 15 saves, and a 2.15 ERA which would have lead the category if he logged an additional 8 IP to qualify for that title. He wrapped up that great season by being named NL Rookie of the Year. 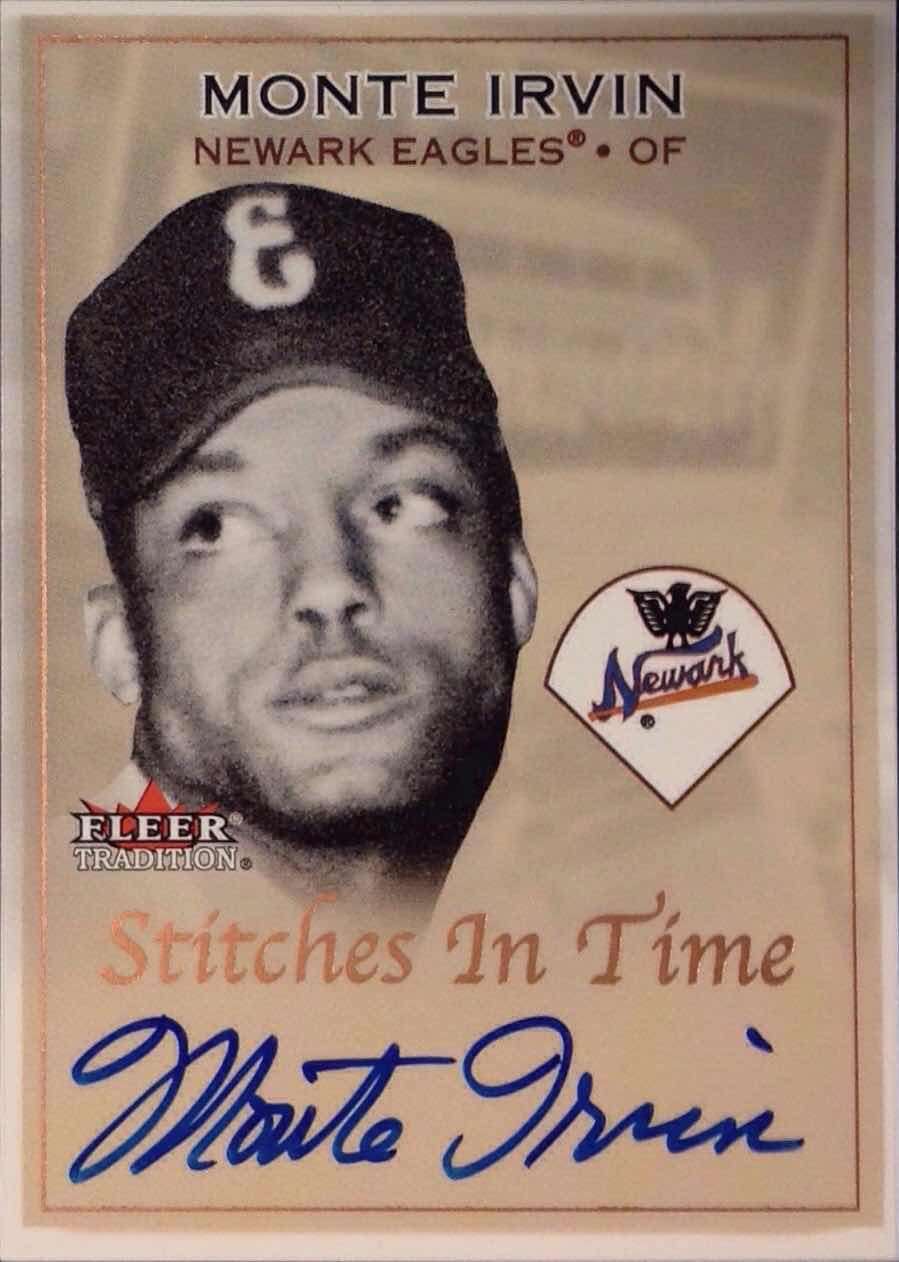 The next pickup... I targeted Monte Irvin second because I at this point in the journey, I wasn't sure if my hobby budget would allow me to complete the auto set and I thought this would go great with the few vintage Irvin's I already had in my collection. In 1951, he led the Giants to the World Series hitting .312 with 24 home runs and 121 RBI. He stepped up even further in the WS, raking at a rate of .458 in the Fall Classic. His season was capped off by a third place finish third in the NL MVP voting and he did all of that while mentoring a young ball player by the name of Willie Mays! 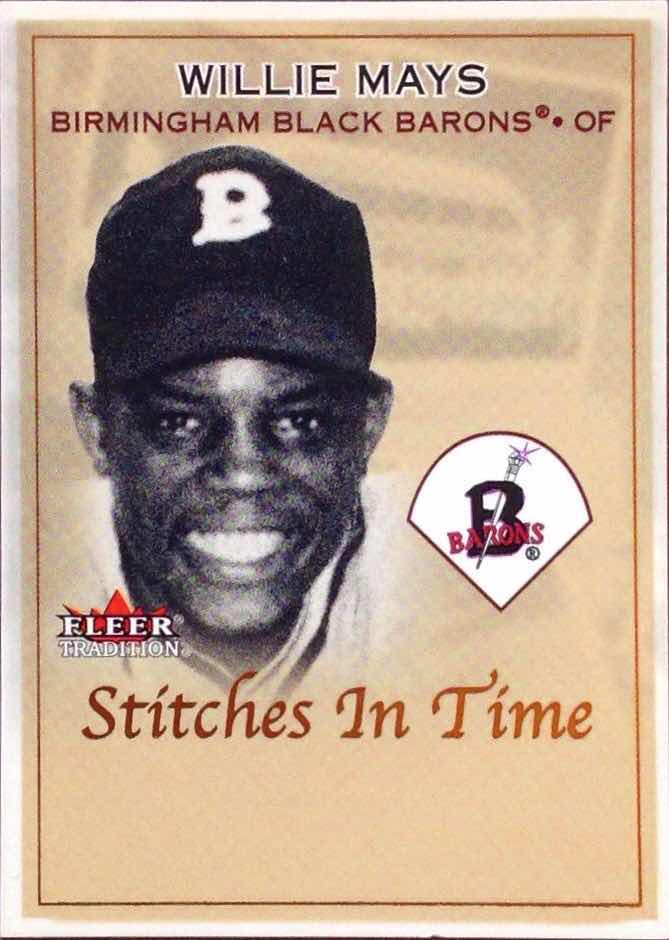 Speaking of the Say Hey Kid... This addition to the set clearly contains no ink. Several signed copies of this card have surfaced in the years since Fleer went bankrupt, however all of those are believed to be forgeries. Mays was well known for his refusal to sign anything related to the Negro Leagues. He began playing with the Birmingham club in 1947 at the age of 16 and helped the Black Barons earn a spot in the Negro League World Series the following year. 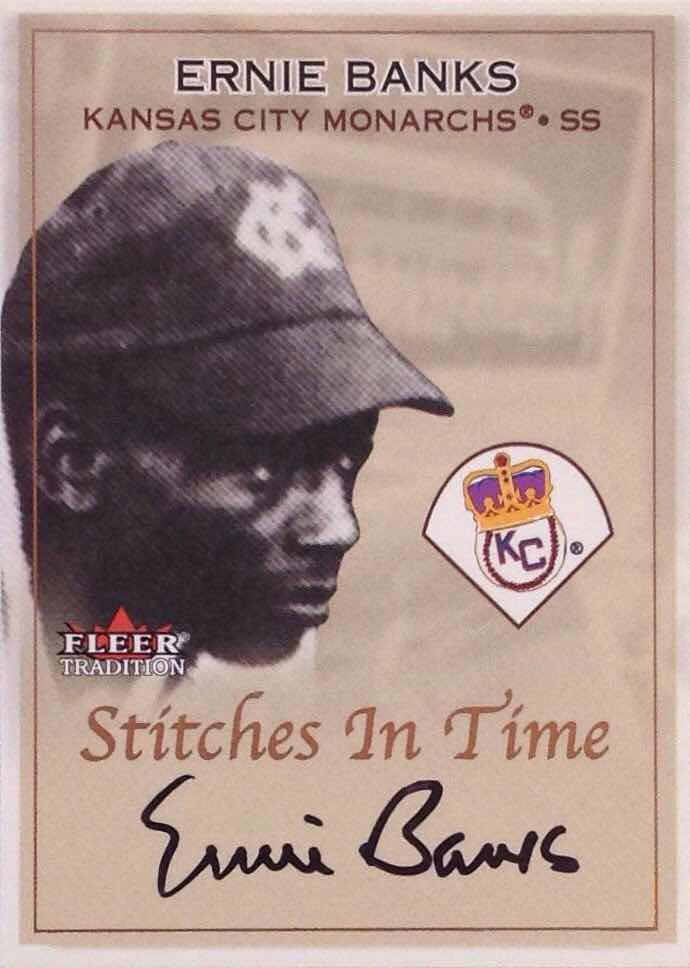 This was the one that got me over the hump so to speak. While it was only the third auto I picked up, it was the big one! When I successfully tracked down a copy that fit into my budget, I knew I'd eventually be able to complete this set. It was quite an exciting acquisition! Banks played two seasons with the Monarchs which were split up by a two year stint in the Army. When the Cubs came calling to sign him, he didn't want to leave because he loved playing in Kansas City so much. He eventually decided the opportunity to sign with Chicago was too good to pass up and the rest is history. 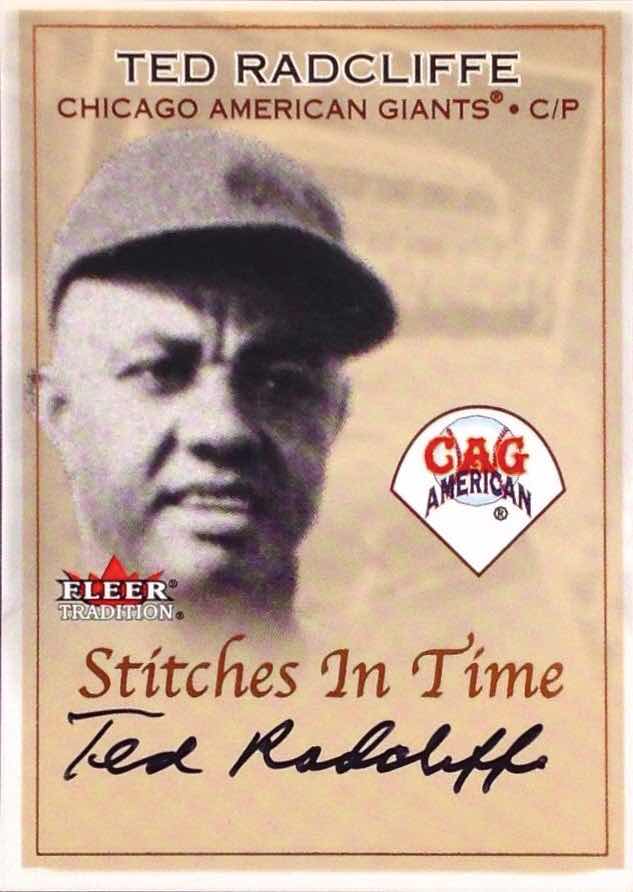 Ted 'Double Duty' Radcliffe was an interesting player. The origin of his nickname came in 1932. While playing in back-to-back games of a Negro League World Series doubleheader, he assumed catching duties in game one and toed the pitching rubber in game two. His performances helped the Pittsburgh Crawfords win the championship that year. Throughout his career, he would go back and forth between the Crawfords and the Homestead Grays with two stints on the Chicago American Giants mixed in. He won the Negro American League MVP award during his second run with Chicago at the age of 43. Incredibly, Radcliffe was 98 or 99 years old when he signed for this set! 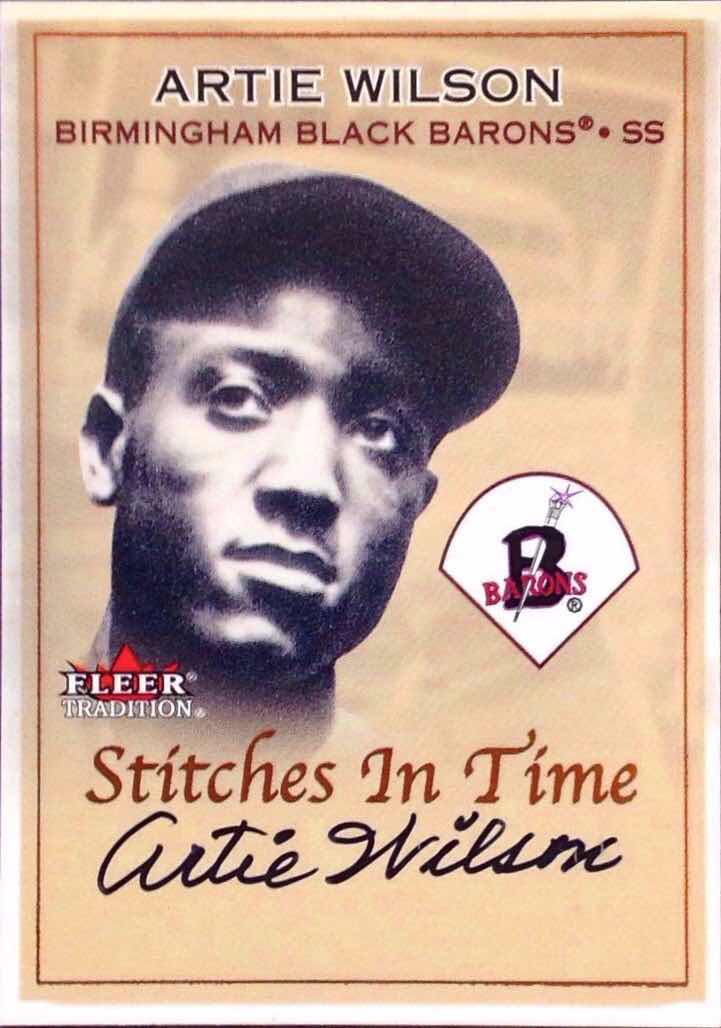 These Artie Wilson cards were apparently not released in packs of 2001 Fleer Tradition like the others, or so the story goes. There are claims that these were redemptions which were filled prior to the bankruptcy and other stories that say they didn't make their way to the secondary market until Fleer's liquidation sale/auction. Either way, these did eventually become available and I was happy to grab one at a very reasonable price. In a stretch of seasons lasting from 1942-1948, Wilson was the best shortstop in the Negro American League. His best season at the plate came in 1948 when he hit .402, eight years after Ted Williams became the last player in the majors to accomplish the feat. In that same season, he served as a mentor to Willie Mays(three years before Monte Irvin did the same in the majors) during the youngster's second season in professional ball. 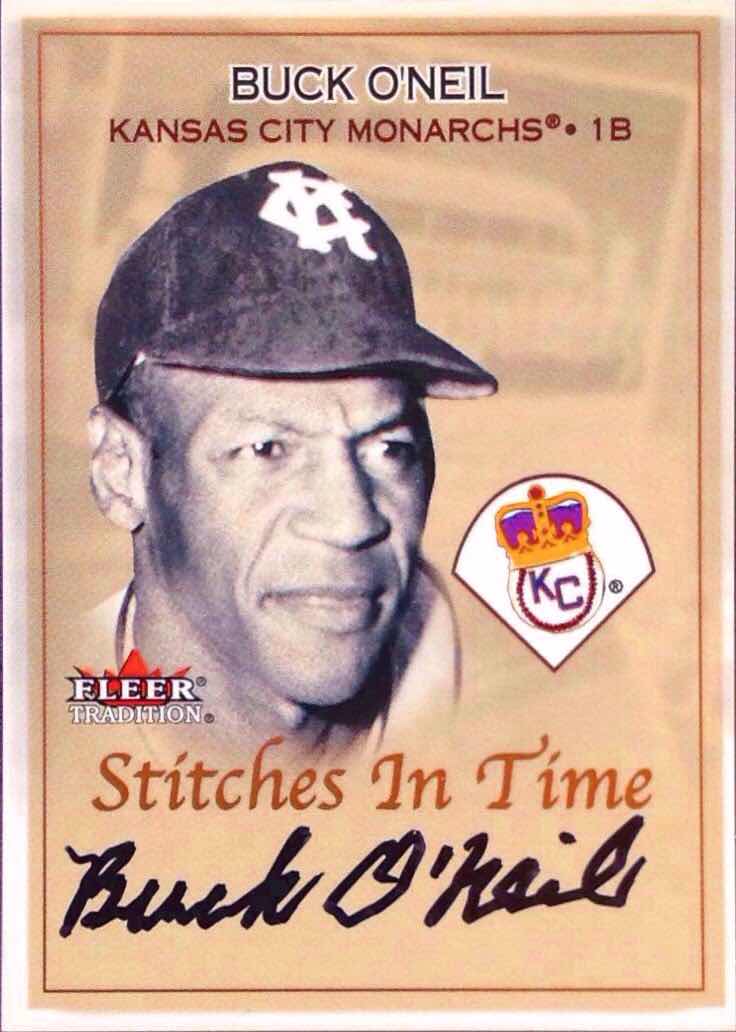 ...and then there was one. Buck O'Neil was the final step on this collecting journey. Buck had a lengthy career as a solid ballplayer. When his playing days were over he became a well-respected Major League coach/scout and later had significant role in establishing the Negro League Museum in 1990. Many likely know him best for being featured prominently in Ken Burns' Baseball documentary.

Hunting down these autographs and researching the players involved was one of the most rewarding things I've done as a baseball card collector. Upon completion I took a small break to enjoy the cards, but now I'm ready to begin tackling the memorabilia portion of the set. Though there are only five cards in the set, two are absolutely huge: Willie Mays and Jackie Robinson. The other three are no slouches either: Elston Howard, Larry Doby, and Roy Campanella. In addition to probable budgetary issues, I'm likely to have considerable difficulty even finding a copy of each one. While tracking currently listed cards(and list price) for over a month, I have only seen copies of Howard, Robinson, and Doby thus far. It's going to take some creative dealing if I'm going to be successful in this endeavor, but I'm up for the challenge! If anyone out there has any of these(or any of my base insert needs) they're willing to part with, let's make a deal. Thanks for reading.
Posted by Tim B. at 9:35 AM