A quick one time return of the Single Card Post Sunday in honor of the Olympic Closing Ceremonies tonight. I've had a blast watching as many events as possible over the past two weeks. I found a blaster of the Topps Olympic set and was fortunate to pull this out of it: 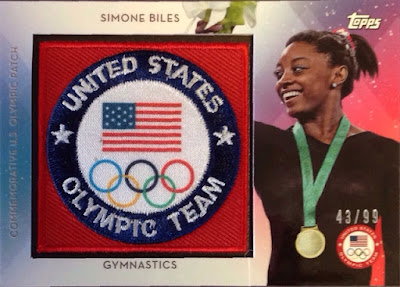 That is a Team USA patch of four-time gold medalist(5 overall), Simone Biles numbered #/99. I figured it would be a great time to show this one off since she will be the US flag bearer during said Closing Ceremonies. The only downer is that it came out of the pack with a crease that is kinda visible down the edge of the relic closest to the pic of Simone. Probably won't try to get it replaced, just cool to have a card like this of one of our most dominant athletes. Anyone have any favorite Olympic moments to share or are you happy they are over for another four years? Thanks for reading.
Posted by Tim B. at 6:37 PM