Over the past few days I've been seeing a bunch of breaks posted for Topps Chrome. Honestly, ive thought about grabbing a spot in one of them. My local retail stores haven't even put any Ginter on the shelves as yet, so I assumed it would be some time before I'd be able to grab any Chrome-y goodness. This morning I was proven wrong. Though my local Target still doesn't have any Ginter on the shelf, they did have a few of the Jumbo/Rack packs of Chrome. I quickly grabbed one and it was practically busted before I got back to the car. Let's take a look at it pack by pack. Please pardon the less than optimal photos I took in the car. 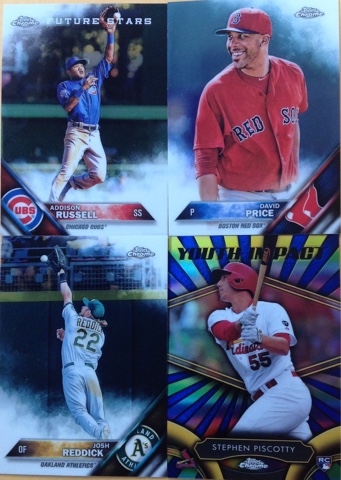 The Russell Future Stars looks really nice and I was thrilled by the unexpected Youth Impact insert of Piscotty. They fall at a rate of 1:12 packs so I was happy to start off ahead of the game and he's not a bad player to pull either. 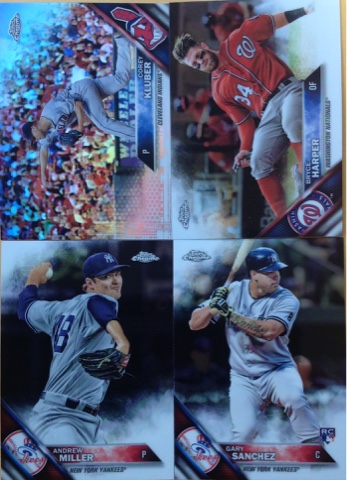 This pack was a home run for me! Two Yankees(albeit one of them now a former Yankee), Harper, and a refractor of Kluber. I may not actively collect Harper, but I always love to pull his cards. The refractors are noteworthy for two reasons. First, the front has the 'honeycomb-like' effect in the corner which helps in identifying it, but also... 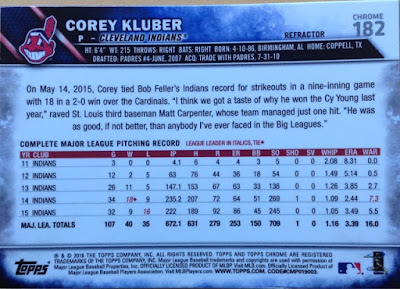 ...they printed 'refractor' on the card back! All I can say is that it's about time. At least it will be easy to pick them out this year. 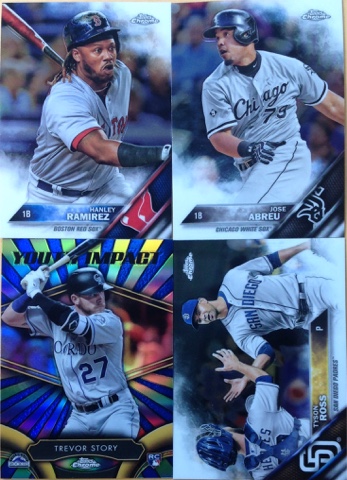 The base cards here were pretty pedestrian, but I really bucked the odds by pulling a second Youth Impact and it was awesome that it was Trevor Story. Bummer that he's likely done for the season after suffering a thumb injury a few days ago.

These really look nice in hand. I could have done better as far as player selection, but overall I can't complain about the Jumbo/Value Pack. I will definitely be hunting for more of these as the days go by. As for the product, it was easier for me to tolerate the 'cloud effects' on the Chrome cards than on the flagship. Perhaps it is because I've grown used to seeing it. Maybe it just really looks better in Chrome. After all, everything looks better with a little bit of shiny added to it, right?
Thanks for reading.
Posted by Tim B. at 3:55 PM