Celebrating the Games of the XXXI Olympiad

This evening the Opening Ceremonies will officially kick off the Rio Olympic Games. I remember watching the summer games every four years going back as far as the 1984 LA Games. At the time I was too young to understand how the political climate impacted those games. I was captivated by the grand scale of the event which was supplemented by the excitement of having family that lived in LA. Ever since, I have actively followed as many events as possible during the fortnight. So, as I anxiously await the Opening Ceremonies and the swimming events that will follow tonight, I want to share some Olympic themed cardboard. 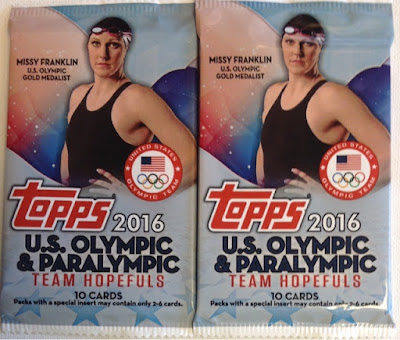 On my many trips to the local Target, I've seen these sitting on the shelf. In previous incarnations, the blasters had promised an auto or relic. This year there is no mention of a guaranteed 'hit' so I opted to drop a few dollars on two loose packs from a freshly opened box. 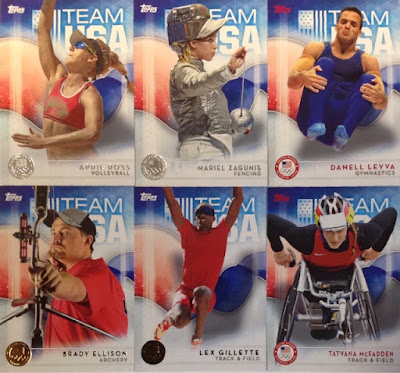 Here are some highlights. There are silver, bronze, and gold(not shown) medal parallels for each base card. I think he design is pretty clean and I like the Team USA across the top. The inclusion of Paralympic athletes is one of the best things about the set for me. In recent years, I've done my best to follow along with those games as well. While I didn't pull any of the big names like Phelps or any of the basketball squad, I did pull this: 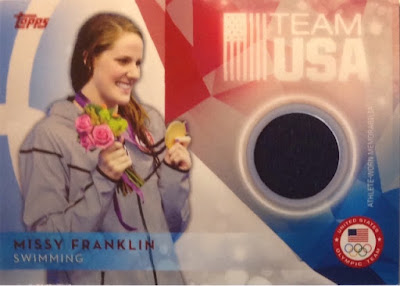 Franklin won 4 gold medals and a bronze in London four years ago and is one of the favorites for gold again. I mean, she's the cover girl of the product! Definitely a decent pull from a loose pack. Moving from the mainstream to the oddball, we have a set that could be found on the backs of cereal boxes in 2012 featuring 'Team Kellogg's'. 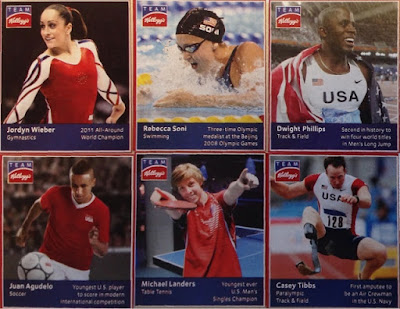 Here are six of the eight cards in the set. 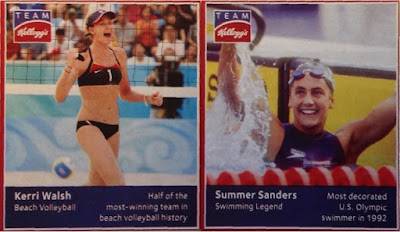 Here are the final two that round out the set. Each box of this: 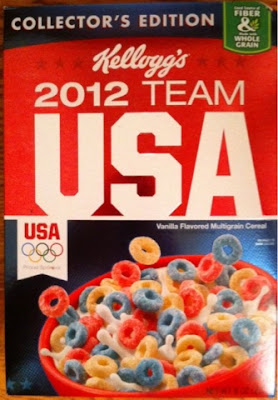 ...contained a complete set on the back. At the time, I had no idea that there were cards of any kind on these boxes, but I was lucky enough to find a set in pretty good shape on Listia for next to nothing. I've got other Olympic themed cardboard that I may share as the games proceed, but for now I hope you enjoyed these. I'm going to go get ready to watch the Opening Ceremonies. Go Team USA! Thanks for reading.
Posted by Tim B. at 1:43 PM