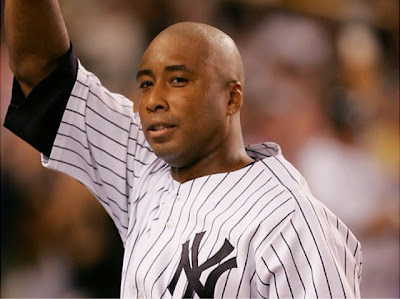 NOTE: I began writing a draft of this post a few weeks ago. I'm actually glad that I didn't get around to finishing it until now.

I LOVE Bernie Williams! He is one of my favorite Yankees of my generation. He was a great hitter(won an AL batting title) and fielder(won 4 Gold Gloves) and was a part of four World Series Championship teams. Addendum: the Yankees announced that they will be retiring Bernie's number 51 this Summer. This is a well deserved honor in my opinion and I'd love to be able to make the trip for the ceremony at Yankee Stadium.

Despite playing in one of the biggest markets in MLB and putting up solid numbers over 16 seasons, he gets relatively little love in our hobby. That's actually alright with me though. It simply means that I have the chance to pick up his cards on the cheap. 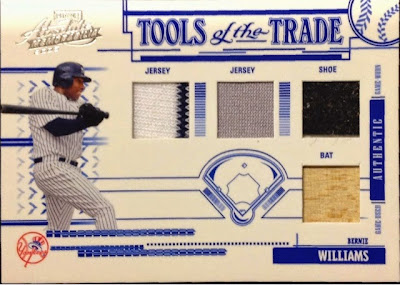 This is a quad memorabilia card from 2005 Absolute. I've got plenty of relic cards, some dual, even a triple here or there, but this is the first quad relic I have. On top of that, it's the first shoe swatch embedded in a card to make its home in my collection. I was able to pick this up on eBay for just a few bucks, so I jumped at the chance to add a new Bernie.

It's hard not to love a hard working, home grown, low key, loyal player like him.