It's happened. For the first time since 2001, I've decided that I'm going to put together the Topps Flagship set. There's not a lot that I can say that hasn't already been said. I like the design, there are some solid rookies in series one, and it has final tribute cards to The Captain.

I previously discussed my decision to take the plunge into my first group break with this set as the product. So, with those cards soon to be en route, I couldn't wait to get my hands on some new cards. Once I finally found some at my local Target, I had to settle for a hanger box. No big inserts, but it was great to have my first taste of the new set. Over the next few days, I found some packs here and there, but my search for a blaster or two had come up empty until yesterday. I happened to stop in to a different local Target and I was able to pick up two of these. 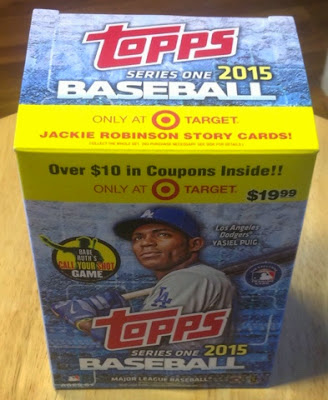 I got home from work late last night, so I spent the little bit of time with my daughters that I could before tucking them into bed for the night. After they were asleep, I had some additional work to do, so I was able to wait until this morning to crack these open. With my goal being primarily to put together the set, I did fairly well with these blasters. In regards to great parallels or inserts, I'm on the fence. Without further delay, let me share the highlights so you can decide. 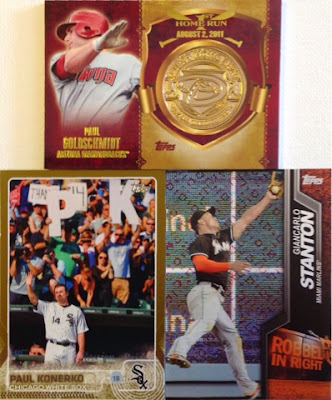 Of my two manu-relics, the one I prefer is the Goldschmidt shown above(the other is Adam Dunn). Hands down, the best card from either blaster was this gold parallel Paul Konerko send-off card. I'm not a Chi-Sox fan, but he was a great player and like many others, I think this will be a contender for card of the year. Of course, I would have been happier if this had been either Jeter's base or checklist card, but I'm definitely happy with this one. The Stanton comes from one of my favorite insert sets of this product. Great shot, great defensive play, great player, what else can you ask for? 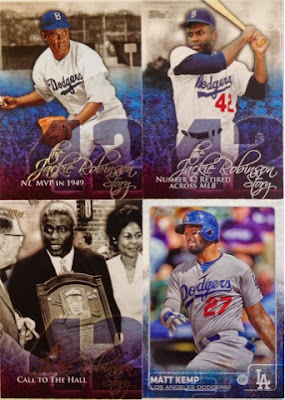 I am also quite find of the Target-only, Jackie Robinson insert. I pulled three of the 10 from the set, so I'm on my way. Honestly, I was disappointed that I didn't pull the card of him playing college basketball. I do like the one of him holding his HOF plaque though. I think it's a clean design and the subject matter is great. I'll also be putting together the Babe Ruth Story insert, but I haven't decided if I will do all 10 cards or just 6-10(skipping his Boston years). The last noteworthy card is the Matt Kemp. If you look closely at his right pinkie, you may see that this is the 'sparkle' variation. I'm not a Dodgers or Kemp fan, but it is the first sparkle card I've pulled since they began doing them. I don't really care for them, but I thought I'd share since it is kinda a tough pull. If anyone out there is interested, I would listen to trade offers.

So, that's it. Two blasters down, though I did OK on base card collation, I'm still a ways off from the complete set. I'll at least pick up a few loose packs so I can use my Target coupons that came in the blasters, but I'm not sure how much more money I'm going to sink into busting packs. It sure was fun cracking packs of the first product of the year though. Sadly, my search for that Jack White will have to continue...for now.
Posted by Tim B. at 9:46 PM