Happy Belated Blog-Aversary to Me

In the hustle and bustle of the holiday season and trying to get some posts actually published around these parts, I completely overlooked that exactly one week ago was my two-year blog-aversary. Despite the second half of the year bringing me unexpected reasons to not be able to post, I am thrilled to be a part of this community. I had planned to do a end of he year wrap up/recap after we make our way into the new year so not much to do in this one besides show off a few additions to the collection that have come my way from sources outside of the blogging community. 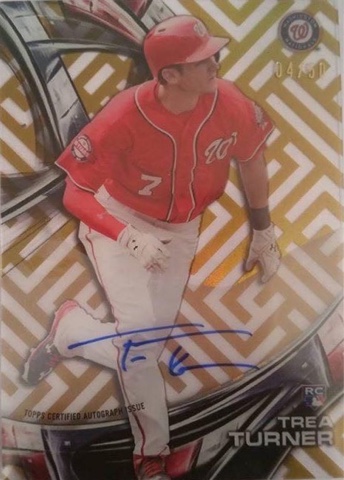 I won this in a razz a few weeks back. I rolled the dice on one spot for $6 and was fortunate to come up the winner! I was especially excited to receive this since it is my first auto of the former Wolfpack standout. Being an NC State guy, I think I'll focus on adding to my Turner collection in blog year three. 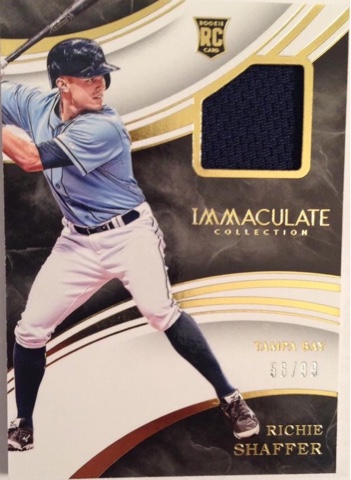 I snagged this in a auto/relic lot for less than $10. As I may have mentioned here before, I really enjoyed watching Shaffer play in Durham over the past few seasons. He was recently traded to Seatlle and then shortly thereafter he was designated for assignment. I suppose there is an outside chance he ends up back in the Rays system, but I just hope he catches on somewhere and gets a shot at the big league level. I'll continue to collect his cardboard wherever he lands.

Lastly, I won this Topps Vault 1/1 on eBay for the minimum bid. I was happy to add this since Motter is probably my favorite Durham Bulls player over the past few seasons. His cardboard appearances on non-minor league issues are rare so I am trying to find whatever parallels I can afford to add. Sadly, he too was traded to Seattle. I hope that he is able to find some regular playing time in the Pacific Northwest and I am anxiously awaiting his first card sporting a Mariners jersey.

What would a blog-aversary post be without announcing a contest/giveaway? If you're interested, simply leave a comment on this post. I'll leave it open until Christmas Day at midnight. I will run all of the names through the randomizer 9 times. Depending on the number of entries, I may award two prizes. Oh, the prizes? What are they, you ask? I'll be sure to customize it to the winner(s) collecting preferences.

Hey, if you can't get enough of contests, want to enter one more, and are a fan of UFC, you should visit Sport Card Collectors blog here: http://sportcardcollectors.blogspot.com/2016/12/review2016-topps-museum-collection.html The deadline for entry is tomorrow.

Thanks to everyone who has read any of the content here over the past two years. It means a great deal.
Posted by Tim B. at 4:19 PM