Sorry if the title angers anyone that is currently getting snowed in. No, it's not snowing where I live. Yes, I kinda wish it was. For now, cracking these is about the only way I'll see snowflakes. 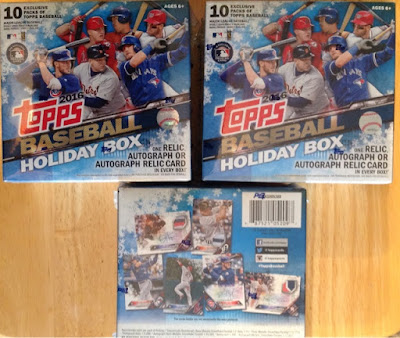 I was finally able to track down a few of these Walmart exclusive 'Holiday Boxes'! Here's the quick breakdown on these. Ten packs of 10 holiday cards and a guaranteed 'hit' for the price of a standard blaster. There's only one parallel to this set, the metallic snowflake. They fall 1:2 packs and look like they have glitter glued to the surface. The vast majority of the images are recycled from a player's flagship issue, but a few are new and/or updated pics. I went light on the scans, but let's get to what made the cut.

Here are three of the metallic snowflakes. As expected, they don't scan well, but I was happy to pull the Schwarber and the Naquin in the boxes. I tracked down the Snell at a relatively new LCS which I have been extremely slack in writing about.

I was hoping for a bit better on the 'hits'. At least the Archer is a keeper because of his former Durham Bull status. I could make the argument for keeping the Moran since he is another 'local', being a UNC alum. 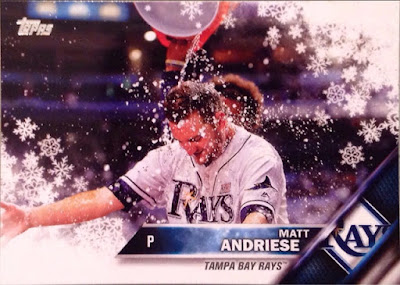 Last scan. Another former Durham Bull! This is my favorite card from the set so far. The effect from the Gatorade shower makes it look like there's a blizzard in Tampa and Andriese is a kid who just found out school was cancelled. OK, maybe that's a stretch but I really think it works well with the snowflake motif. If anyone out there has picked any of these up, I am going to out together the complete set of 200. Yeah, 300 cards(less parallels and 'hits') and I'm still somewhere in the vicinity of 75 cards short. Sorry I didn't scan Chapman and Andrew Miller in their new threads, but I was trying to keep this brief so I could actually get something published.

Speaking of getting things published... As you may or may not have noticed, there has been another prolonged silence here on the blog. I have had a few false starts in trying to get back to at least a semi-regular posting schedule and thus far they have all stalled for one reason or another. This time, it's for real. I am going to finish the year strong. First and foremost, I need to catch up on trade posts once again. With that, I introduce a holiday themed series: The 12 Days of Trade Posts. Beginning tomorrow, and not necessarily in order of when I received them, I will be making a push to post a lot of the great cardboard I've received over the past few months. In news not related to the content of the blog, I am also going to be making several trips to the PO to drop some long overdue trade packages that will hopefully arrive in time for whatever holiday you all celebrate! To whomever is still out there, thanks for reading.
Posted by Tim B. at 8:46 AM