My Favorite Piece of 2016 Cardboard

I've got to admit that until I saw the post by P-Town Tom that announced the 'Favorite Card of 2016' contest, I hadn't really taken much time to think on that topic. As I commented on his post, two cards immediately popped into my mind. I have since thought quite a bit about it and actually slowed down to look over a bunch of the cards I have in my collection at have been released this year. I shouldn't have needed an excuse to do that, but I'm glad that the contest reminded me that I should be looking at and flipping through the cards in my collection more often.

I searched through Flagship(1&2), Opening Day, Donruss, Archives, some GQ, a little A&G, Heritage(regular and High Numbers), Bunt(physical), Bowman, Stadium Club, Bowman Platinum, Topps Chrome, Optic, and Topps Holiday. I've considered completed sets like Spring Fever and Marketside Pizza. I've even looked at handfuls of NFL, NHL, WWE, UFC, and even some Star Wars. Through all of that, I've was reminded of some really great cardboard that has been released this year. However, when the searching was over, my thoughts kept returning to those two that originally came to mind. It was a truly difficult decision as both cards clearly captured the emotions that make watching sports so great. After the dust settled, I decided to go with a card that was issued as a part of Panini's Father's Day promotional set. 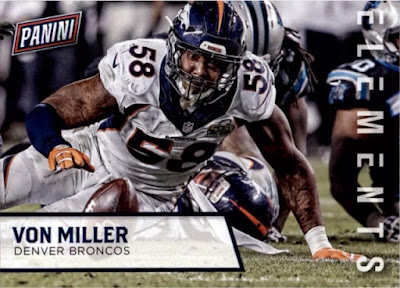 For me, this card perfectly captures a pivotal moment early in the 'Big Game'. It's got it all: the Super Bowl 50 patch, a view of the fumble that Miller just forced, and the fire in his eyes. It helps that this card depicts a player from my favorite football team who just so happened to become Super Bowl MVP, but I would even find this to be a great card if I weren't a Broncos fan. I'm looking forward to reading about other folks' choices. Good luck to all in the contest and thanks for reading.
Posted by Tim B. at 3:42 PM