A Brief and Early Peek at Some Archives 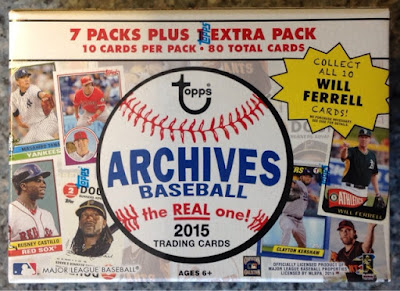 Imagine my surprise. While I was perusing the card aisle at the local Target, what did I see? Blasters of the soon-to-be officially released 2015 Topps Archives! I hadn't planned on making a card purchase, but of course I had to grab one of these! 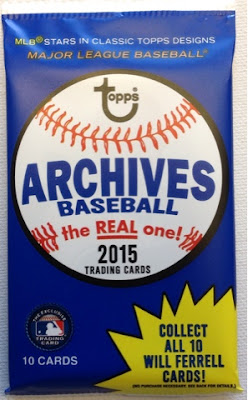 The packs looked like this, albeit very briefly(before I quickly ripped them). The blaster contained a total of 80 cards and I got a mixed bag, nothing terribly exciting but certainly solid.

Stars of today(and maybe tomorrow). I don't collect either Trout or Stanton, but they were a few of the bigger names that were in my first 8 packs. Taylor is probably my favorite rookie that was pulled. He may well be the next Nats player that I start to collect.

Stars of yesterday! Again, no PC(though Rickey is close), but these are some of my favorite retired player cards of the lot.

Yankee stars! These are just three of the six Yankees, but they're definitely the three best photos to share.

Last but not least, insert stars! Mission kinda accomplished. I would have been terribly disappointed if the blaster didn't yield at least one of the ten Will Ferrell cards. As it was, I had to suppress disappointment anyway because the Ferrell was smack-dab in the middle of the first pack I opened. I had high hopes that at least a second would make an appearance. Oh well, there's always tomorrow to go back and grab another blaster. For now, it's one down and nine to go! I was pleased to pull the Gomez. I wasn't sure what it was exactly, but a bit of research says it is a gold parallel. It's serial #'d out of 50 on the back. I might know someone out there that would enjoy this one... I wrap the insert portion of the program with one of the most well known US Presidents, a very cool card of Abe Lincoln.

Not too shabby. Sadly, no SP's(which meant no Bryant or Soler RC), Topps Game inserts, or Will Ferrell auto's but I guess I can't have it all in the first blaster. I'm just thrilled to be able to open something early for a change! Opening this makes me wish I could justify the cost for one of those last spots in the Nachos Grande group break of this stuff!
Posted by Tim B. at 9:01 PM