I recently claimed some hockey cards from JediJeff of 2x3 Heroes. Back in my younger days, I was an pretty huge NJ Devils fan. To this day, I guess I'm a casual fan. So, when the opportunity arose to claim some Devils cards, I jumped. Jeff has said that he's going to continue to drop cards on everyone until they're gone and the first installment arrived the other day. 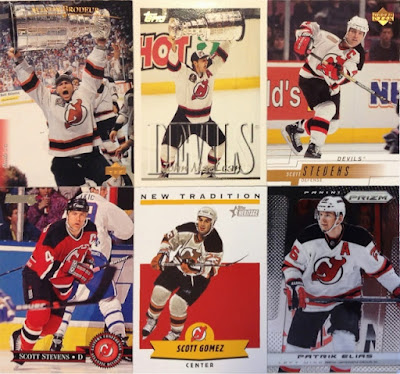 These were the highlights. There were guys included that I had to Google, but these guys were on the teams back when I followed closely. My favorite of the bunch is definitely the Brodeur in the upper left corner. Great player+great shot holding the Stanley Cup=incredible card! I was thrilled to see not just one, but two cards of players hoisting the trophy. The envelope was heavy on the captain of those squads too, Scott Stevens.

Jeff also helped me cross off three more 2015 Topps series one base cards. I'm betting sooooo close to finishing that set, just a few more to go. Thanks Jeff.
Posted by Tim B. at 10:40 AM