Attack of the PWE's

I've connected with a bunch of great trading partners over the course of my first six months of writing this blog. Now that I find myself snowballing towards my one year anniversary, the frequency and random timing of deliveries to my mailbox from some of these partners has picked up pace as well. Case in point, the recent barrage of PWE's that found their way to me courtesy of Mr. Shoebox Legends himself, Shane.

A short while ago, an unexpected envelope arrived.

It was filled with a bit of vintage goodness, a former captain, and one of the greatest hitters in MLB while I was growing up.

Don't think that there was a lack of shiny, because that Gosuke Katoh Bowman insert has that covered. No matter what anyone says, I still love 'The Rocket' too! After checking these out I thought I'd get them scanned and a post written fairly quickly, but before I had the chance to do either, another envelope arrived. 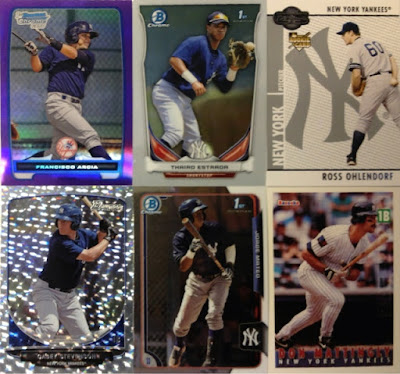 I found some more shiny(and in he purple Arcia's case, serial numbered) goodies, two of the many young SS that are bursting from the seams of the Yankees farm system, my first Co-Signers card, and another Donnie Baseball. Thanks for the great additions to my collection Shane! You're quickly becoming my most prolific trading partner.
Posted by Tim B. at 4:18 PM