My First Stadium Club in 13 Years

That's right, thirteen years. The last time I purchased any Stadium Club was way back in 2002. It's not that I don't like the brand, because I really do. Especially as I get older, I have developed a real appreciation for the top notch photography that most folks rave about. Since last year's product was Hobby-only, I never got the chance to get my hands on any packs. In fact, I only own two cards from last year's set, the Derek Jeter that shows him with his fellow 'Core Four' team members and the Yangervis Solarte auto that was sent to me by Shane from Shoebox Legends a few weeks ago. I know that at some point I'll change that, but that's not the point of this post. I intended for my next 'new product' post to be about series two. Instead, I've decided to publish posts out of order because I finally got my hands on some packs of this season's SC and I'm really excited to share before it gets to be old news. Let's dive in to the three rack packs I picked up. 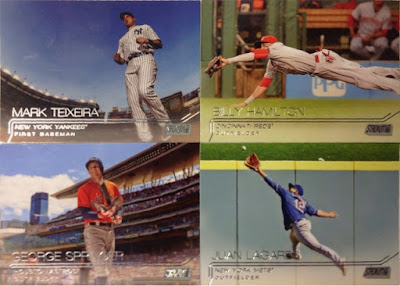 Horizontal cards to start. A pair of nice stadium shots and a pair of great defensive plays. Of course I'm partial to the shot of Tex warming up at Yankee Stadium, but the shot of Springer prepping for an at-bat at home is pretty nice too. 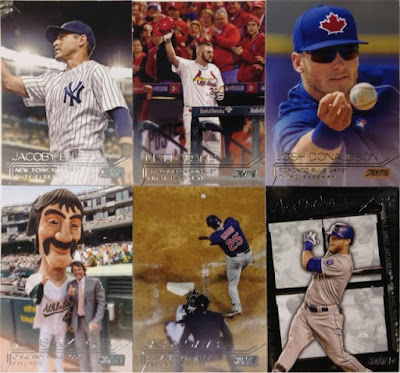 Another Yankee Stadium shot. It would have been perfect for last year's set as it was Ellsbury's first season playing in the bright lights of New York. I thought the Adams and Giambi were great photos. The Donaldson is a gold parallel...totally pointless, but a great pic. The Gordon insert doesn't really have any redeeming quality in my eyes. I'll be hoping I avoid this insert set as I bust more packs. Eck x 2!!! How awesome is that? By far the best card of this scan, but not nearly the best I pulled.

A few dominating pitchers from different decades. I'm loving the photo of a young and spry Iron Horse(still not the best card I pulled). 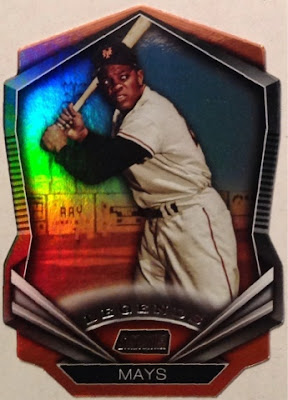 Say hey! Now here's an insert set I can get behind. I mean, die-cut Legends? What's not to like?

I've made you wait long enough. Here's the best card I pulled: 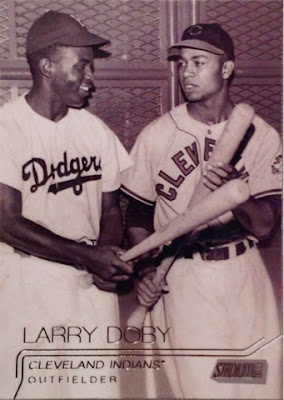 When I saw this, my jaw dropped. Granted, I've only seen a small percentage of the set so far(in hand and in various posts), but this one is going to be hard to beat for best card of the set. Here you have the players who broke each league's color barrier standing side by side presumably exchanging trade secrets. Just an incredible image. Way to go Topps!
Posted by Tim B. at 7:45 AM