The Art of Making a Deal

In the few months since joining the blogosphere, I've been spoiled. There, I said it. I've added all sorts of new cards to my collection just by sending cards that I didn't want to other collectors. Most of the time, this has been done with little more than the exchange of an address and the knowledge of that other person's favorite team(s), players, or types of cards. Rarely, in my experience, has there been much specific discussion of what would be sent or received. It's been close to 15 years since I've traded with anyone face to face, so needless to say the art of negotiating the trade has gotten quite rusty for me. That was until this past week.

In addition to writing this blog, I belong to a Facebook group of mostly local folks that trade, discuss, and show off their collections. I haven't posted much within the group, but when post started showing up highlighting Archives hits, I reached out to a few group members. I figured it might be a good way to put a dent into my Will Ferrell and Topps Game insert set needs. Turns out I was right. It just took way more work than I've been used to. In the long run, I only had to part with one card that even made me remotely think twice. The rest have been sitting in various boxes since I pulled them out of packs. Let's check out the new additions from my first completed FB group trade. 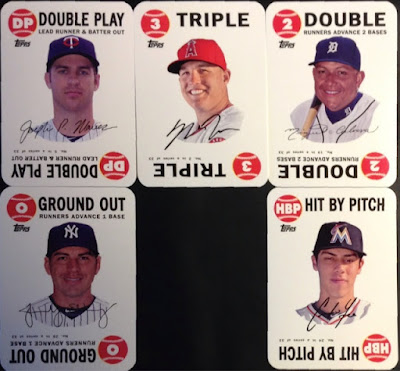 Here are the ones that started it all! Not too bad to check off Trout and Miggy in the same trade. Heck, I even knocked out The Yankee from the set in that Ellsbury! This wasn't all for this trade though. The cards that I had to offer in return outweighed the value of these Game inserts alone and this trade partner wasn't willing to part with any Ferrell cards, so I expanded my interests a bit. 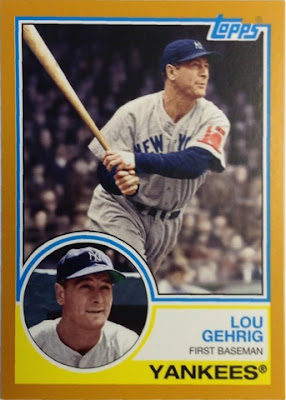 I was able to secure this Gehrig gold parallel numbered 43/50. It's a bit strange seeing The Iron Horse on the 1983 design, but I still like this card quite a bit. 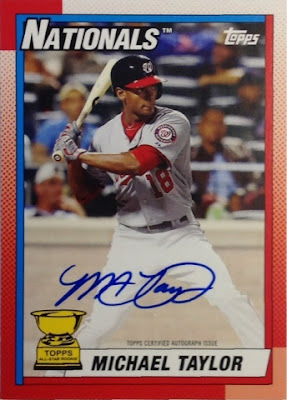 Next, I took the dive on Michael Taylor. I'm still not 100% sure that I'm going to start collecting him, but adding this auto has me leaning that way. I didn't realize until I received this that it is numbered on the back. 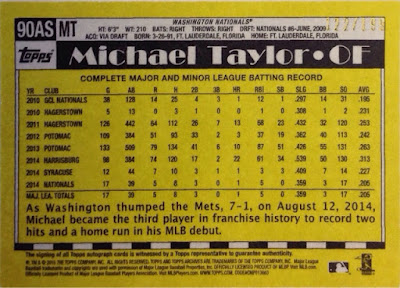 I think this is a silver parallel auto /199. Whatever it's officially called, doesn't really matter to me. It's a nice new auto. 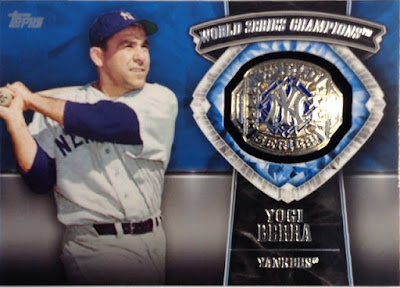 This was the final piece to this trading puzzle. I hadn't held one of these Championship Ring manu-relic cards before, but this Yogi was offered and I jumped at the chance to bring it home.

Just a few days after securing these in my first group trade, I finalized my second. This one happened to be with a group member that happens to be a fellow blogger as well. The following cards came to me courtesy of Eric from the great blog The Snorting Bull. As an aside, this happens to be one of the first blogs that I discovered and read regularly prior to starting my own.

Eric was kind enough to send me three more Game needs. It was pretty nice to be able to cross off the Puig and Goldschmidt as well. We had actually agreed on the trade for these three when I decided to ask about the availability of his Ferrell playing for the Reds. Shortly thereafter, we finalized this one. You can see what I sent Eric's way here. When I opened the envelope, this is what I saw: 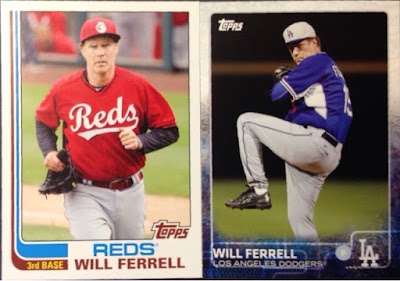 He had sent me both of the Ferrell cards that he had posted. I already had the Dodgers card, but I'm pretty sure that I can find someone that needs it out there. Thanks for the trade Eric! If I come across any other Cardinals, I'll be sure to let you know!

Anyway, that wraps up my first two Facebook group trades. While hey sure did require a lot more work than the 'blind trades' that I've grown accustomed to, the effort was sure worth it to come those few steps closer to completing two more insert sets. Heck, I was even able to acquire a few other cards for the collection too. I guess the old trading skills weren't too rusty after all.
Posted by Tim B. at 9:49 AM