Shortly before the holiday season really kicked off, I received another hit filled envelope from Pirate fan and author of one of my favorite blogs out there, Matt of Bob Walk the Plank. This is the second time I've been fortunate enough to be on the receiving end of a package from him and it packed a big punch just like the first. This time around all of the cards were very artistic. 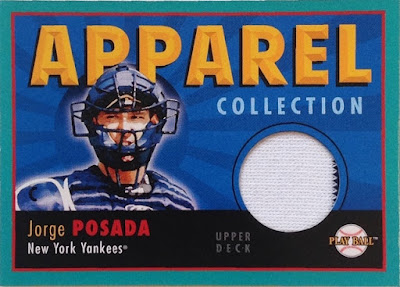 It's been a while since I've added a new Jorge relic. This one looks like they took a photo and applied a filter to make it kinda look like a painting. Pretty cool to see the edge of a pinstripe instead of the common plain white swatch. 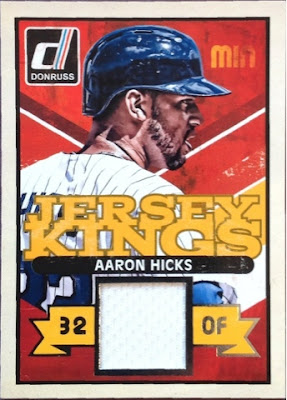 Here's my first relic of new Yankee OFer, Aaron Hicks. The lack of logos and the way Hicks is positioned on here cleverly hide the fact that this is a Twins jersey. With the pinstripes in the pic/painting, I can almost convince myself that this is a Yankees jersey, I just have to ignore the 'MIN' near his batting helmet. It's a very cool card, and my first Jersey King from the 2014 set. I'm excited to see what Hicks can do this season. 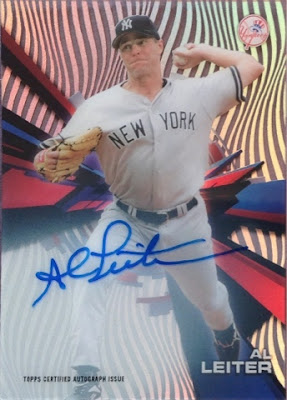 Last card of the pack and I was thrilled to get another High Tek Yankee(an autograph to boot). While this card features an actual photo and not some sort of painting, the wild background pattern teamed with the blue, red, and black linear design remind me of 'modern art'. Leiter carved out a pretty good career for himself over parts of 18 seasons for four different teams where he was a contributor to three World Series Championship squads. I really enjoy watching him on MLB network these days.

Thanks for another awesome envelope Matt. I'll have some Buccos packed and ready to head your way in the near future. Thanks to everyone for reading another installment of The Great Trade Package Catch Up.
Posted by Tim B. at 2:19 PM