Thursdays are my long day at the office. I'm typically there from around 8am-8:30pm. I know there are plenty of people that only work 12 hour shifts, so I'm not complaining, but I usually find a lot of my impulse buys are on these days simply because it helps me get through the day. Whether I open whatever I get during my break or save it until the end of my shift as an incentive, grabbing a little something to open definitely helps me get through the long day. Yesterday, right as I was going to leave the office, I noticed an email that detailed Upper Deck's new digital card app. When I heard about it, I sat in my car and created an account and immediately opened my daily free pack. 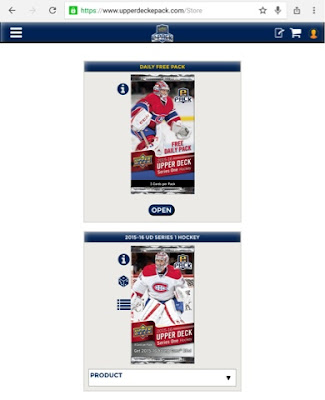 I know a lot of you out there don't consider these 'cards' and won't waste time with apps like this, but I really dig flipping through a new 'pack', especially when I'm not depending any money. I'm also intrigued by the concept that Upper Deck has come up with. This is like a hybrid of other digital trading card apps and the eTopps concept. Apparently, you can opt to have actual cards from your collection within the app sent to you. Here's pack number one. 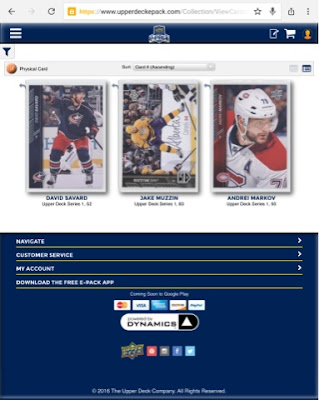 I'm definitely going to add it to my daily digital trading card routine. After checking out the app, I felt the need to open some real packs. I needed to run an errand that would bring me near another Target that is not my normal local Target. When I stopped in, I found the first 100 card hockey repacks that I've seen in my area. I've seen the unopened pack varieties before, but never wanted to spend the 12 or 20 bucks to pick one up. When I saw this face card, I figured it was worth the 5 dollar gamble.

I cracked it open and ripped the pack open first. 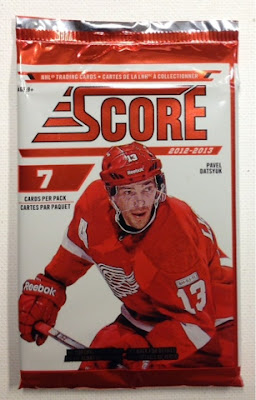 I haven't collected hockey cards in a really long time, so I'll just dive in. Feel free to drop some knowledge on any of these.

I recognize Getzlaf only because I know some of you out there collect him.

Cammaleri is a current Devil, so therefore a favorite. Also pulled a rookie, but it have no idea if it's a 'true RC' or if that is even a real concept in the world of collecting hockey cards. 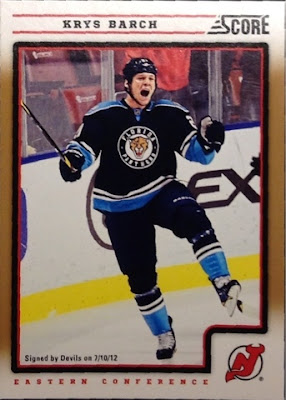 The final card of the pack at least sports the Devils logo. Based upon the wrapper, I think this may be a gold rush parallel? Not sure. Now on to the highlights of the 100 card block. It was heavy on 1990 Bowman and one of the '90's Parkhurst sets and overall, I found it to be a really enjoyable stack. 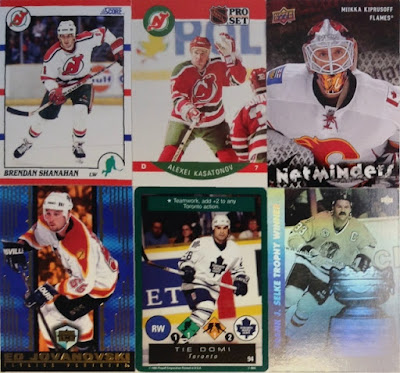 I'll start with two of the three Devils in the pack along with an awesome net minders card. I remember Ed Jovanovski when he was the first draft pick in the early '90's. When I see a Tie Domi, the first work that comes to mind is 'goon'. My only memories of seeing him on the ice involve him throwing fists. Lastly, a really cool award winners hologram of Dirk Graham. 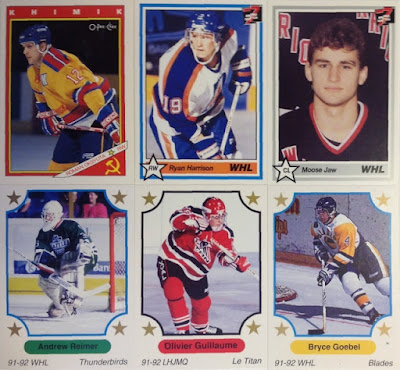 Don't know any of these guys, but they're all pretty cool. I mean until I checked out the back of the upper right card, I thought the guy's name was Moose Jaw! Turns out it is a team checklist. At least I got a laugh out of it. 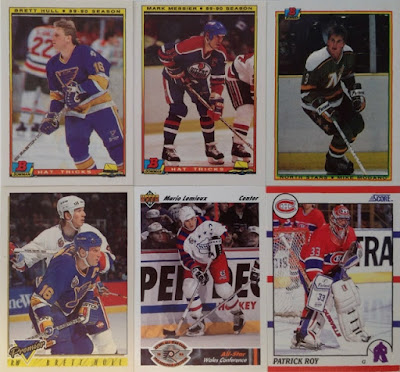 Now here's the star portion of the program. All told, two Hull, two Roy, a Messier, a Modano, and a Lemieux is a pretty strong showing. 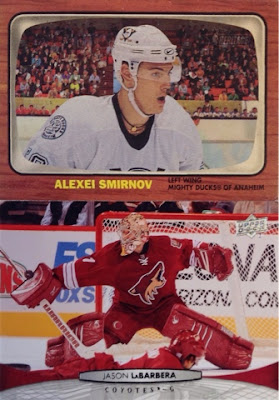 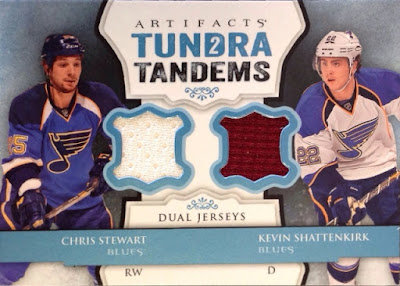 I've got no idea who either of these guys is and I don't have particularly like the Blues, but a dual relic is still awesome! I'm not sure how many more hockey repacks I'll ever go for, but it sure was an entertaining repack. Thanks for reading!
Posted by Tim B. at 10:32 AM